Diplomatic row escalates between Turkey and the Netherlands

Turkish President Recep Tayyip Erdogan has warned the Netherlands it will "pay the price" for harming ties after two of his ministers were barred. 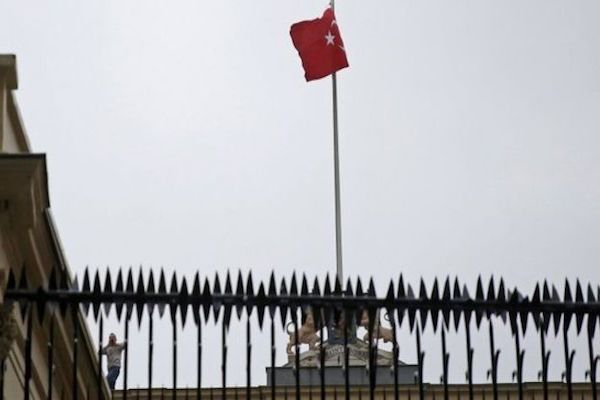 The Dutch government said such rallies would stoke tensions days before the Netherlands' general election. Turkey's ties with several EU countries have become strained over the rallies. The rallies aim to increase support among Turks living in Europe who are eligible to vote in a referendum on expanding Turkish presidential powers Fatma Betul Sayan Kaya, Turkey's family minister, had arrived in Rotterdam by road on Saturday, but was denied entry to the consulate and taken to the German border by Dutch police.

Several EU countries have been drawn into the row over the rallies:

Local French officials have allowed a Turkish rally in Metz, saying it does not pose a public order threat - while France's foreign ministry has urged Turkey to avoid provocations

Mr Erdogan accused countries in the West of "Islamophobia" and demanded international organisations impose sanctions on the Netherlands.

"I have said that I had thought that Nazism was over, but that I was wrong. Nazism is alive in the West," he said.

He thanked France for allowing Mr Cavusoglu to travel to Metz to address a rally.

"This country was bombed during the Second World War by Nazis. It's totally unacceptable to talk in this way."

Mr Erdogan's comments were "completely unacceptable", and the Netherlands would have to consider its response if Turkey continued on its current path, he added.

The Dutch government is facing a severe electoral challenge from the anti-Islam party of Geert Wilders in its election on Wednesday.

Reports say the owner of a venue in the Swedish capital, Stockholm, has also cancelled a pro-Erdogan rally on Sunday that was to have been attended by Turkey's agriculture minister.

Sweden's foreign ministry said it was not involved in the decision and that the event could take place elsewhere.

What is the row about?

Turkey is holding a referendum on 16 April on whether to turn from a parliamentary to a presidential republic, more akin to the United States.

If successful, it would give sweeping new powers to the president, allowing him or her to appoint ministers, prepare the budget, choose the majority of senior judges and enact certain laws by decree.

What's more, the president alone would be able to announce a state of emergency and dismiss parliament.

There are 5.5 million Turks living outside the country, with 1.4 million eligible voters in Germany alone - and the Yes campaign is keen to get them on side.

So a number of rallies have been planned for countries with large numbers of eligible voters, including Germany, Austria and the Netherlands.

Why are countries trying to prevent the rallies?

Many of the countries, including Germany, have cited security concerns as the official reason.

Austrian Foreign Minister Sebastian Kurz said Mr Erdogan was not welcome to hold rallies as this could increase friction and hinder integration.

Many European nations have also expressed deep disquiet about Turkey's response to the July coup attempt and the country's perceived slide towards authoritarianism under President Erdogan.

Germany in particular has been critical of the mass arrests and purges that followed - with nearly 100,000 civil servants removed from their posts.