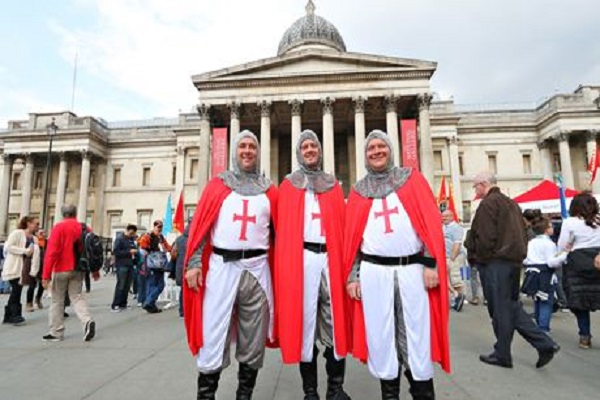 David Cameron is to argue that England's national day has for too long been overlooked, in a St George's Day message that is calculated to woo Ukip voters while avoiding alienating Scots.

With the flag of St George due to fly above Downing Street on Wednesday, Cameron says: "More and more people are coming together on or around 23 April, eager to celebrate everything it is to be English."

But in a careful nod to September's Scottish referendum on independence, he adds that one of England's greatest achievements has been its role in creating the world's greatest family of nations – the United Kingdom. He argues that the nation's "achievements in industry, in technology, sport, music, literature and the arts" far outweigh its size.

And he cites a highly individual list of English exports. "In America, where Newcastle Brown Ale is the most imported ale; in China, where the most popular international football team is from London: Arsenal; in Australia, where they go mad for a Cornish cuisine – the humble pasty; in South Korea, where Yorkshire-set Downton Abbey is a TV favourite. And across the globe, where the best-selling band is from Liverpool: the Beatles."
On Tuesday, in another move to shore up his right flank, Cameron signalled that he planned to bring onshore wind farm subsidies to an end as soon as possible.
Speaking in Hertfordshire, the prime minister said the time will come when Britain meets its targets to generate energy from onshore wind and subsidies at that point would then be cut.
There have been reports that the Tory manifesto in 2015 will say there will be no subsidies, but Cameron's remarks at a question and answer session with workers at Skanska's offices in Rickmansworth suggest the policy may be conditional on progress towards meeting government renewable targets.
The event, involving a rare joint appearance with George Osborne, was designed to highlight government infrastructure investment plans.
Cameron said the "government should not keep subsidies for longer than they are necessary and so that is something we are looking at. The big picture is that we have put our money where our mouth is."
Cameron insisted he was still running "the greenest government" but added: "In terms of onshore wind obviously there will come a time a time when we have built enough to meet all our targets and so I've always said we should not keep subsidies for longer than they are necessary."
Renewable UK the trade association for wind, wave and tidal power companies described Cameron's remarks as irresponsible.
Jennifer Webber said: "Onshore wind is already the cheapest mainstream renewable electricity technology and developers are committed to get costs down. It's irresponsible and unnecessary to talk about arbitrary limits for onshore wind. Increasing policy risk just pushes costs up and threatens investment."
The Guardian
Your comment has been forwarded to the administrator for approval.×
Warning! Will constitute a criminal offense, illegal, threatening, offensive, insulting and swearing, derogatory, defamatory, vulgar, pornographic, indecent, personality rights, damaging or similar nature in the nature of all kinds of financial content, legal, criminal and administrative responsibility for the content of the sender member / members are belong.
Related News