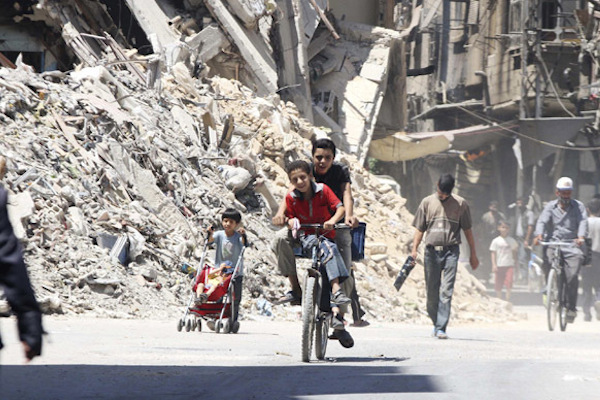 The plight of Syrian civilians has not improved but rather worsened, six months after U.N. resolution 2139 was passed that aimed to address the humanitarian crisis there and improve the delivery of aid to those caught in the middle of the civil war, UN Assistant Secretary General for humanitarian affairs told the Security Council on Thursday. Kyung-wha Kang said the Syrian civil war “continues unabated,” with more deaths of women, children and men.
“Each day results in more lives lost and more families and communities destroyed,” he said. "The social and economic fabric of the country has been ripped to shreds."
Since the beginning of the war in 2011, more than 191,000 people have been killed, with July recording more than 1,000 civilian deaths and injuries, the U.N. said.
The city of Aleppo and governorates of Dar’a, Hama and Idleb were especially hard-hit by bombs.
In Dar’a, more than 30 barrel bombs were reportedly dropped on the city between July 22 and July 31, killing 10 civilians, including five children.
Yet, despite the worsening conditions the U.N. said that it will work with national and international partners in an effort to reach Syrians in need.
“The collective punishment of civilians continues, in flagrant violation of the most basic principles of international humanitarian law,” Kang warned.
Civilians under threat
An especially dire situation concerns hampered water supply to civilians.
Several radical groups, including the Islamic State, formerly know as the Islamic State of Syria and the Levant, have several times cut the water supply to civilian areas.
“In the face of total impunity, grave human rights violations have become the norm in Syria,” Kang noted, adding that it must stop.
In the midst of the further detoriating situation, there has been some hope. Across borders access has helped to improved the delivery of aid “in hard-to-reach areas” including Aleppo, Dara, rural Damascus, Idleb, Quineitra and Lattakia governorates.
The UN has sent nine shipments to Syria from neighboring countries, including seven from Turkey. Additional shipments are planned in the next month.An estimated 241,000 people still remain under siege in various part of Syria.
"Much more needs to be done by the parties to ensure that access is rapid, regular, safe, and unhindered,” Kang said. "“We must all redouble our efforts until we reach everyone in need with humanitarian assistance," he added.