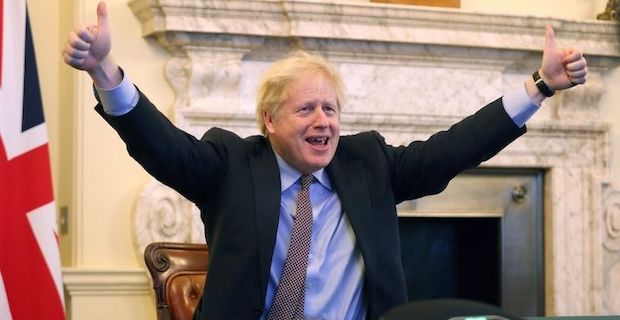 The UK and EU reached a post-Brexit trade agreement on Christmas Eve on Thursday after four-and-a-half years of bitter negotiations and only a week to spare until the end of the transition period on Dec. 31. A statement by 10 Downing Street said: “Deal is done. Everything that the British public was promised during the 2016 referendum and in the general election last year is delivered by this deal. “We have taken back control of our money, borders, laws, trade and our fishing waters. European Commission President Ursula von der Leyen said at a news conference: "It was a long and winding road, but we have got a good deal to show for it. It is share. It is a balanced deal. And it is the right and responsible thing to do for both sides.”

UK and EU both claim victory

The UK was keen to sell the benefits of Brexit, with the Downing Street statement adding: “The deal is fantastic news for families and businesses in every part of the UK. We have signed the first free trade agreement based on zero tariffs and zero quotas that has ever been achieved with the EU.

“The deal is the biggest bilateral trade deal signed by either side, covering trade worth £668bn in 2019.

“The deal also guarantees that we are no longer in the lunar pull of the EU, we are not bound by EU rules, there is no role for the European Court of Justice and all of our key red lines about returning sovereignty have been achieved. It means that we will have full political and economic independence on 1st January 2021.

“A points-based immigration system will put us in full control of who enters the UK and free movement will end.

“We have delivered this great deal for the entire United Kingdom in record time, and under extremely challenging conditions, which protects the integrity of our internal market and Northern Ireland’s place within it.

“We have got Brexit done and we can now take full advantage of the fantastic opportunities available to us as an independent trading nation, striking trade deals with other partners around the world.”

“We will continue cooperating with the UK in all areas of mutual interest. For example, in the field of climate change, energy security and transport. Together we still achieve more than we do apart. And thirdly, we have secured five and a half years of full predictability, for fishing communities, and strong tools to incentivize to remain so,” she said.

She continued: “Of course, this whole debate has always been about sovereignty. But we should cut through the sound bites, and ask ourselves, what sovereignty actually means in the 21st century. For me, it is about being able to seamlessly do work, travel, study, and do business in 27 countries. It is about pulling our strength and speaking together in a world full of great powers. And in the time of crisis, it is about pulling each other up, instead of trying to get back to your feet, alone.

“The United Kingdom is a third country. But it remains a trusted partner. We are long standing allies. We share the same values and interests, whether it be the COP 26 summit in Glasgow, or the upcoming UK G7 and Italian G20 presidencies, the European Union and the United Kingdom will stand shoulder to shoulder to deliver on our common global goals.”

Since then, it has been in a transition period, which meant that the UK still followed EU rules while it worked out a new trading arrangement with its largest trading partner and the world’s largest single market.

Negotiations over the past year have been acrimonious, with disagreement focused on three key issues: fishing, which is economically unimportant by politically symbolic; the so-called level playing field, where the EU wanted to protect the integrity of the single market and against unfair competition by ensuring the UK did not use excessive state subsidies or cut its regulatory standards while still having tariff and quota-free access; and governance, which was how the deal would be enforced.

In a no-deal Brexit scenario, the UK would have traded with the EU on WTO terms from Jan. 1, 2021. Britain insisted it would prosper in this scenario, to the incredulity of experts who pointed out the huge tariffs that would be placed on British exports to the EU.

This scenario has now been avoided. It has taken the UK four and a half years, two elections, and three prime ministers to reach this point.

The text now has to be ratified on both sides, a tall order considering how late the agreement has been reached.

On the British side, the UK parliament in Westminster will have to ratify the deal, but it has already broken up for Christmas.

Local media are reporting that parliament could be recalled on Dec. 30 to push through the deal.

The pro-Brexit government has a majority of 80, but some backbenchers will still hold the government’s feet to the fire if they feel London has conceded too much sovereignty to Brussels.

The opposition Labour Party lost its traditional working-class base over its refusal to fully back Brexit, but young people and progressives who form the bulk of the party membership are adamantly opposed to Brexit. The party’s leadership is expected to back the deal, though there is scope for rebellion on its backbenches too.

The deal will almost certainly be passed by the British parliament, however, backbench drama notwithstanding.

On the EU side, there will not be enough time for the European Parliament to ratify the deal, so member states will have to approve the provisional application of the deal until it is formally ratified.

Keywords:
BrexitChristmas EvePost-Brexit Trade Agreement
Your comment has been forwarded to the administrator for approval.×
Warning! Will constitute a criminal offense, illegal, threatening, offensive, insulting and swearing, derogatory, defamatory, vulgar, pornographic, indecent, personality rights, damaging or similar nature in the nature of all kinds of financial content, legal, criminal and administrative responsibility for the content of the sender member / members are belong.
Related News