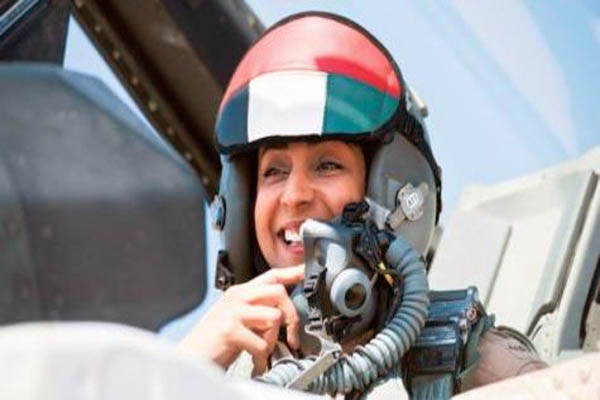 Captain Mansouri, 35, pilots an F-16 Fighting Falcon, a single-engine multirole fighter aircraft, and is a squadron commander. Born in Abu Dhabi to a family of six girls and three boys, Mariam studied science in high school in Khor Fakka were she graduated with 93%. She went on to study English literature at UAE University before joining the Khalifa Aviation College. She joined the UAE Air Force in 2007 when authorities first announced they were accepting volunteers however women were still not allowed to become pilots in the Air Force. She continued to work in the General Command of the UAE Armed Forces, and once women were permitted to join the Air Force, she was the first to apply. During her career, Mansouri has taken part in a significant number of the aerial maneuvers both inside and outside the UAE alongside allied and friendly states. Although proud to pave the way for other women Mariam says it was the “defense of the homeland” and “ the promise of the challenge and the competition to reach the highest level” that drew her to military aviation.

As for being in competition with her male counterparts, the Major said this was never an issue, saying she “focused on competing with herself to improve her skills”.

“Competing with oneself,” she told the magazine, “is conducive to continued learning.”

Her accomplishments have not gone unnoticed in May she was bestowed the “Pride of the Emirates Medal” at the the Mohammed bin Rashid Excellence Awards , where she recived an audiance with UAE Vice President, Prime Minister and Ruler of Dubai, Mohammed bin Rashid Al Maktoum.