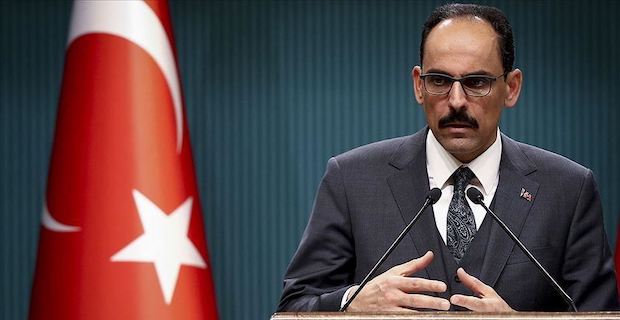 A presidential spokesman on Tuesday severely rejected political comments that the results from Sunday's local elections in Turkey meant "the beginning of the end" for Turkish President Recep Tayyip Erdogan.

"Some are servicing the beginning of the end for Erdogan story again. They will never learn," Ibrahim Kalin tweeted.

He went on to say: "Stop presenting your wishful thinking as fact and analysis."

According to unofficial results, Erdogan's Justice and Development (AK) Party led the elections garnering 44.3 percent of overall voter support and the People's Alliance -- AK Party's coalition with the Nationalist Movement Party -- got 51.6 percent of the ballots.

AK Party won 15 metropolitan cities and 24 cities in the elections.

Keywords:
Recep Tayyip ErdoganTurkey Local ElectionsIbrahim Kalin
Your comment has been forwarded to the administrator for approval.×
Warning! Will constitute a criminal offense, illegal, threatening, offensive, insulting and swearing, derogatory, defamatory, vulgar, pornographic, indecent, personality rights, damaging or similar nature in the nature of all kinds of financial content, legal, criminal and administrative responsibility for the content of the sender member / members are belong.
Related News