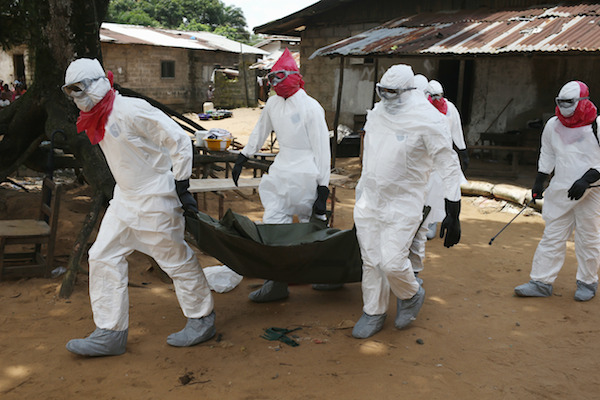 Nigerian authorities on Thursday confirmed another Ebola death – the sixth life to be claimed by the deadly virus in Africa's most populous country.
"Nigeria has now recorded a total of six deaths from the Ebola virus," Health Minister Onyebuchi Chukwu told a news briefing in Abuja.
"A medical doctor that attended to an Ebola-positive patient died in Port Harcourt," he said, referring to the provincial capital of the oil-rich Rivers State in the country's south.
Chukwu said the doctor's widow "is now symptomatic and quarantined in Port Harcourt awaiting laboratory results, while 70 contacts have also been placed under surveillance."
It is the first Ebola fatality to occur outside Lagos, where all other Ebola infections and fatalities have been recorded.
It raises public fears that the virus might be spreading and cast doubts on earlier government claims that Ebola had been successfully contained in the country. The latest cases bring the total number of confirmed Ebola infections in Nigeria to 15. Six people have already died of the virus; seven have been treated and discharged from hospital, while two remain quarantined.
The health minister said that the patient who had been treated by the deceased doctor in Lagos had survived and was among the seven already discharged from hospital.
Chukwu added that "all secondary contacts of [Ebola] in Enugu will have completed their 21-day incubation period tomorrow," noting that none of them had shown any symptoms.
Nigeria, which has declared Ebola a national health emergency, received its first case of the virus through Patrick Sawyer, a Liberian who was carrying the disease when he snuck onto a Monrovia-Lagos flight. Sawyer later died in Lagos. Five Nigerians have now succumbed to the virus, including the latest death in Port Harcourt. In recent months, Ebola – a contagious disease for which there is no known treatment or cure – has claimed 1,429 lives in Liberia, Sierra Leone and Guinea.
Four fatalities have also been confirmed in the Democratic Republic of Congo (DRC).
The tropical fever, which first appeared in 1976 in Sudan and the DRC, can be transmitted to humans from wild animals.
It also reportedly spreads through contact with the body fluids of infected persons or of those who have died of the disease.