Claudia Winkleman speaks for the first time about her daughter

She was on fire. It feels like she was on fire for hours, but the surgeon said that it definitely wasn’t the case and it was probably just seconds 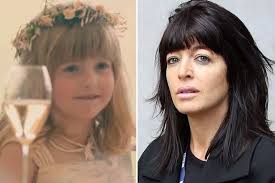 In an emotional TV interview, Claudia says how little Matilda, eight, went up in flames after her fancy dress costume caught alight near the west London home, last year. Talking about the lead-up to the incident, Claudia says: “I live in a square where all the kids get dressed up and we go around the square trick or treating.I bought her costume from a supermarket, she wanted to go as a witch so she had a witch’s hat and a cape and some stripy tights and a sort of long flowy skirt thing.

She was on fire. It feels like she was on fire for hours, but the surgeon said that it definitely wasn’t the case and it was probably just seconds she went up, is the only way I know how to describe it. It was a spark and she screamed out for me. It was like those horrific birthday candles that you blow out and then they come back, it was really fast, it was fast, it wasn’t fire like I’d seen. Asked if it was a life-changing experience by Watchdog presenter Chris Hollins, Claudia replied: “Its life changing, but not life defining.“It was definitely life changing for me. I can’t remember life before it… I wish I had been dressed as the witch is mainly all I wish, that it had happened to me. She went up, and I don’t want that to happen to another child.(mirror)