70,000 without power all Scotrail services suspended

The rail service suspension notice at Inverness Railway Station this morning. All Scotrail services across the region were also suspended this morning, while checks for fallen trees and other damage were carried out. A Scotrail spokesman warned rail passe 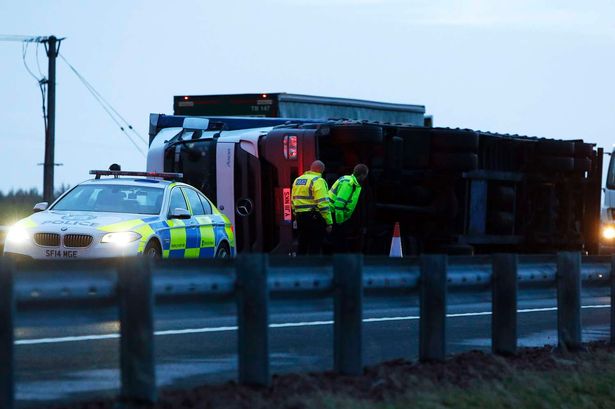 THE Kessock Bridge northbound has now reopened after being closed by severe gales which struck overnight. The bridge remained open to vehicles heading southbound while Bear Scotland dealt with a fallen tree blocking the northbound carriageway. Further afield the Skye and Dornoch Bridges were also closed to all vehicles, although these have now re-opened to all but high sided vehicles. Many places are also reporting power outages, with the Black Isle sitting in darkness this morning when viewed from Inverness.

The communites of Inverarnie, Farr and Drumnadrochit were still without power this morning and many telephone lines were down.The A82 was closed for a period due to fallen trees and the road to Cannich was also shut. The traffic lights at Lovat Bridge, outside Beauly are also off. Inverness Fire and Rescue were kept busy overnight due to fallen trees, and are currently attending an incident in Balnafoich, after trees fell onto a power line and caught fire. Fire officers have also been making buildings throughout the night after several roofs threatened to collapse in Inverness.

Energy giant SSE's online power cut tracker was also reporting dozens of separate incidents this morning, with at least 18 separate outages reported in The Inverness Courier catchment area. In total, around 73,000 homes in the Highlands and Islands are reported to be without power. 9, 200 homes are without power in Inverness-shire.

The rail service suspension notice at Inverness Railway Station this morning. All Scotrail services across the region were also suspended this morning, while checks for fallen trees and other damage were carried out. A Scotrail spokesman warned rail passengers to expect disruption on some services until at least 4pm, and no alternative transport is being provided due to the severity of the storm. "Due to the severity of the overnight storm, all ScotRail services are currently suspended to allow Network Rail to check the lines are safe for trains to run," they said. "At present we are advising customers NOT to try to travel by train. Thank you for your understanding. We are working with Network Rail to re-open lines as soon as we can.