At least three people have been killed and 150 injured after anti-government protesters clashed with Ukrainian police in the capital Kiev on Tuesday. 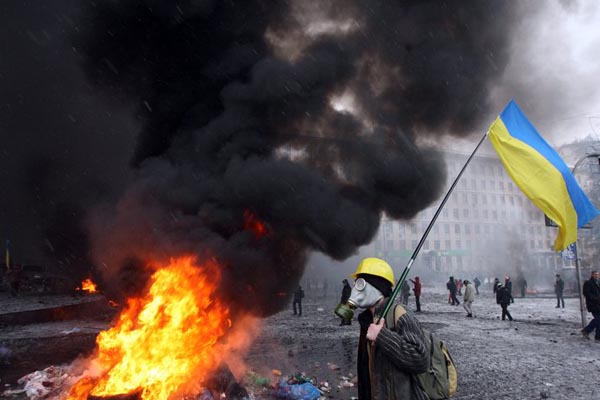 Ukraine's defence ministry ordered protesters on Tuesday to immediately leave a cultural centre for the military which they had moved into earlier, the ministry said. Earlier on Tuesday an opposition lawmaker said three bodies of protesters, killed in clashes with police, were lying in the "Officers Club' building which is about 100 metres from parliament.

"The leadership of the Defence Ministry demands that the protesters immediately clear out of the central officers' club and avoid provocative measures in future which can lead to a sharpening of the situation," it said in a statement on its website.

Within hours of the clashes, the Russian foreign ministry said that the violence was a "direct result of connivance by Western politicians and European structures that have shut their eyes...on the aggressive actions of radical forces".

In a statement, the Russian foreign ministry urged the Ukrainian opposition to "refrain from threats and ultimatums and establish a substantive dialogue with the authorities with the aim of extricating the country from deep crisis”.

Half a dozen protesters were also killed during similar protests two weeks ago, after the Ukrainian opposition started a popular uprising against the government, resulting in the resignation of the former prime minister.