GAZİANTEP HAS BECOME ONE WITH TEKNOFEST THANKS TO ITS ENERGY, THRILL AND EXCITEMENT

The third TEKNOFEST, the festival of aviation, space and technology organized by the Republic of Turkey, Ministry of Industry and Technology and Turkish Foundation of Technology Team (T3 Foundation) has just started in Gaziantep. 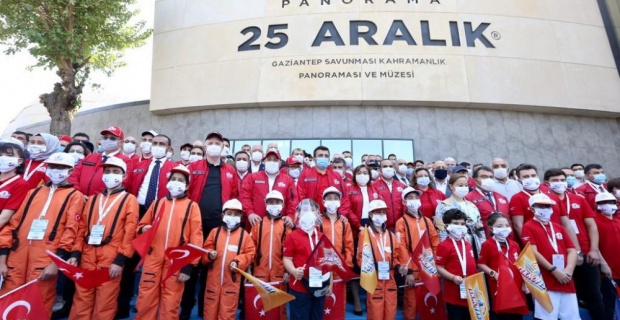 TEKNOFEST THRILL IN GAZİANTEP
The third TEKNOFEST, the festival of aviation, space and technology organized by the Republic of Turkey, Ministry of Industry and Technology and Turkish Foundation of Technology Team (T3 Foundation) has just started in Gaziantep. The festival with 21 categories and over 100.000 participant application, aims to improve the human resource qualified in science and engineering and to reach out to young people across Turkey who have the potential of transforming the world.

TECHNOFEST, world’s biggest aviation, space and technology festival, is held in Gaziantep, for the first outside of Istanbul. TEKNOFEST, ending in 27th of September, is seen as the festival of “National Technology Move” is organized under the leadership of Turkish Foundation of Technology Team (T3 Foundation) and the Ministry of Industry and Technology and with the support of pioneering technology companies, public institutions, media institutions and universities of Turkey. Within the scope of the festival, nearly 5000 finalists among over 100.000 young people applying to technology competitions in 21 different categories, compete with each other. The ranking ones in these activities under the hospitality of Gaziantep Metropolitan Municipality will be awarded.

VARANK: TEKNOFEST IS AN ACTIVITY WITH THE POWER OF TRANSFORMING THE SOCIETY

In his opening speech at TEKNOFEST, Mustafa Varank, Minister of Industry and Technology, has stated that the interest in the festival is increasing every single year and said “In the first two years we were in Istanbul and we said let’s have a landing on Anatolia and here we are in Gaziantep. In this path, where we have the goal of “Turkey, Developing Technology”, hundreds of thousands young people join us every single year. All are focused on one goal, developing ground-breaking technologies. Our young people have created their own teams by pushing their challenging circumstances, had brainstorming, created projects by having R&D and innovation roadmaps. They have worked till the mornings at their ateliers and achieved quite ambitious works ranging from electric cars to rockets, from autonomous vehicles to unmanned submarine vehicles. TEKNOFEST is an activity with the power of transforming the society. Young people of today, who launch rockets and competes with UAVs, will develop the most modern missiles, aircrafts and will be the architects of smart cities of this country.”

In continuation of his speech, by taking the opportunity of festival, Minister Varank delivered the good news of establishment of “TUBITAK libraries” at schools of Gaziantep and stated “We are working to develop critical technologies of future and to produce competitive high technology goods. We have ambitious but also quite realistic dreams. We would like to develop innovative and essential products which will be hugely demanded by the whole world and to see the statement of “Made in Turkey” on these products. With TEKNOFEST, we try to raise the awareness of public, of every single person in the country on the capability of us to develop technology”.

ŞAHİN: TEKNOFEST IS A PARADIGM, TRANSFORMATION OF THINKING

By highlighting that their aim is the smart cities equipped with high technologies, Gaziantep Metropolitan Municipality Mayor Fatma Şahin, stated that “We do see TEKNOFEST as the transformation for reaching the goals of the city, transition to high technologies, establishment of “Silicon Valleys” by people with ages from 7s to 70s to strengthen the infrastructure. This transformation will lead us to become the 10th biggest economy of the world. And this festival prepares the basis of our goals. TEKNOFEST is not just another festival; it is an important basis for us enabling us to think big in order Turkey to have high technologies and to reach the goal of “fully independent Turkey” and also to eliminate the technology gap of the country. For TEKNOFEST, successfully realized in Istanbul so far, this year a decision to open up to Anatolia has taken. The reason behind TEKNOFEST to visit our city is that Gaziantep is a city of industry, trade and university with over 1 million of young people. The excitement and big thinking of the young people gives a great vision, a great love, faith, horizon and belief for the upbringing of many other Ali Kuşçu in the next period. As soon as the city felt this, it started to work very seriously and at TEKNOFEST, which is held in our city this year, twice as many applications have been made comparing the last year’s in Istanbul. TRY&DOs have been prepared. Competitions were held. There was a quite remarkable level of preparation and participation from primary school, high school and university, both in number and quality. This is quite important for us. TEKNOFEST is not just a festival, it is a paradigm, a transformation of thinking ”.

BAYRAKTAR: GAZİANTEP HAS BECOME ONE WITH TEKNOFEST THANKS TO ITS ENERGY, THRILL AND EXCITEMENT

T3 Foundation, Chairman of Board of Trustees, Selçuk Bayraktar, by underlining that they have brough TEKNOFEST from Istanbul to Anatolia, Gaziantep, the lands where sun rises, stated “Gaziantep has become one with TEKNOFEST thanks to its energy, thrill and excitement. We had one dream while starting the festival. We imagined developing the best technologies in the world. This year we share this dream with our young brothers and sisters, with millions. Due to the COVID-19 pandemic, we will have a TEKNOFEST, which is closed to visitors, but all precautions are taken. Despite the pandemic this year, we received a record level of applications. We almost broke a world record. More than 20 thousand teams, a total of 100 thousand young people applied to the competitions. Fully independent and strong progress in Turkey is possible not only by using technology but also with imagining, developing and producing. TEKNOFEST is the platform where these young people who will build the future live. The national technology move also has a spirit that supports the great transformation and equal opportunity in our society. There are children of Turkey who will change the world when they are given the opportunity. The whole point is to open the way for these children and eliminate their barriers. It is our obligation to our beloved nation to mobilize all means for the whole of Anatolia. We will never give up on our full independency journey, from national technology move and the goal of elevating Turkey’s technology to the top level”.

Keywords:
Republic Of TurkeyTurkish Foundation Of Technology TeamTEKNOFEST
Your comment has been forwarded to the administrator for approval.×
Warning! Will constitute a criminal offense, illegal, threatening, offensive, insulting and swearing, derogatory, defamatory, vulgar, pornographic, indecent, personality rights, damaging or similar nature in the nature of all kinds of financial content, legal, criminal and administrative responsibility for the content of the sender member / members are belong.
Related News