Cyborg glasses save users the need to control emotions 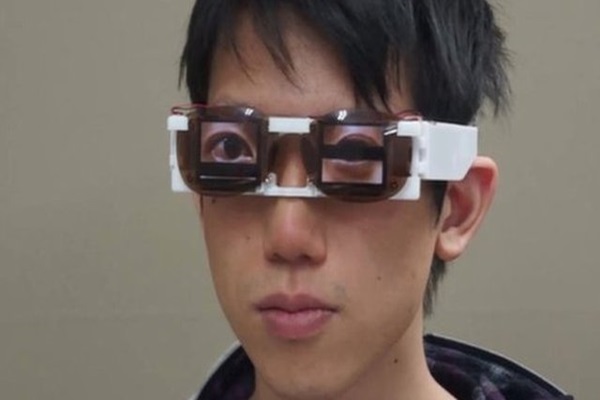 Rather than focus on what the owner sees, Prof Hirotaka Osawa's kit shows computer-generated eye animations in place of the wearer's real ones. Special lenses let the user see out or take a secret nap if they prefer. The professor said the glasses could be used to simulate emotional reactions when users are distracted or busy. He added that the idea of creating an "emotional cyborg" was inspired by the work of an American sociologist who had coined the phrase "emotional labour" to refer to the use of facial expressions and body movements to show feelings. This, Prof Osawa noted, could be a requirement for nurses, waitresses, teachers, therapists and others working in interaction-intensive professions. "Our developed society requires workers to behave more socially," he told the BBC. "AgencyGlass aims to support such kinds of emotional labour by extending users' social abilities with technology, just as robots already support our physical labours and computers support our mental activity." 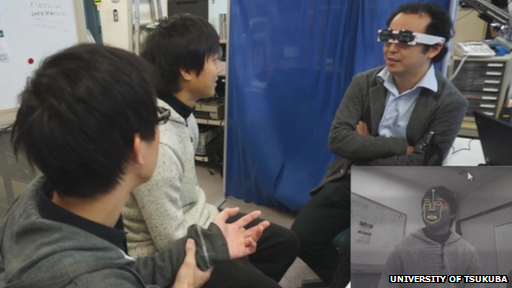 The glasses feature two OLED (organic light-emitting diode) screens, which are controlled by either a smartphone or PC via a Bluetooth wireless connection. This computer is also connected to a camera to take readings from the wider environment. On the glasses themselves. gyrometer and accelerometer sensors are fitted to one arm to monitor the user's behaviour, while a battery sits on the other arm to power the device.

If the user nods, the glasses show a blink.

If they shake their head, the eyes blink several times.

If they incline their head, the eyes look upwards.

If the computer's facial recognition software detects someone looking straight at the wearer, the computer-generated eyes move and gaze back at them.

Although these are relatively simple expressions, the professor said they allowed others to feel they were "cared" about, while freeing the user of the need to "control their emotions".

The professor is well aware how odd his prototype looks.

The professor suggests the glasses can be used to mask exhaustion

In a humorous promotional video he even shows himself using AgencyGlass to appear alert at a meeting in his Tsukuba University office when in fact he is sleeping. But others agree that with some more work the kit could have real-world uses. Dr Nadia Berthouze suggested the glasses could be used to tackle the problem people from Western and Eastern cultures sometimes have atrecognising each other's emotional states. "People can misinterpret expressive signals." explained University College London's reader in affective interaction and computing. "The equipment could be developed to become a facial-display translator between two cultures where facial expressions are different. "If you ask: 'Would someone buy the glasses the way they look now?' The answer, I'm sure, is no. The eyes are too funny.

"But the idea could be explored."

In the meantime, Prof Osawa said he intended to expand his research into emotional cyborgs by creating another display to mimic a wearer's smile. "An earlier study suggests that the human mouth is more effective at influencing [the way people interpret] emotion than human eyes in Western culture," he explained. He added that he hoped to unveil the smile display in October.