Loss ends Turkey's hopes of being promoted to League A 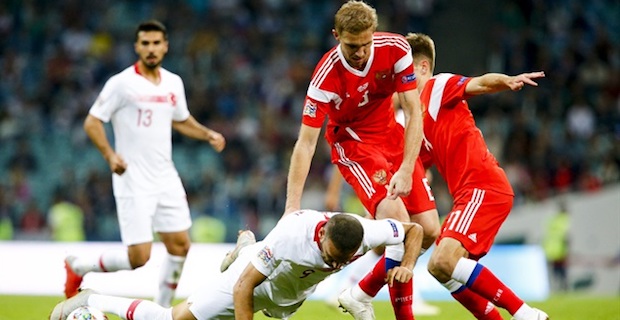 Playing at home in Sochi, Russia dominated the first half and scored the first goal with Roman Neustadter as he put Russia ahead in the 20th minute.

In the second half, just seven minutes after entering the game, substitute player Denis Cheryshev scored the second goal for Russia in the 78th minute.

In League B - Group 2, Russia lead Turkey by 4 points at top of the group.

The loss ended Turkey's hopes of being promoted to League A.

In an away match on Sept. 8, Russia defeated Turkey 2-1 in their first UEFA Nations League game.

Keywords:
UEFA Nations LeagueRussia Turkey
Your comment has been forwarded to the administrator for approval.×
Warning! Will constitute a criminal offense, illegal, threatening, offensive, insulting and swearing, derogatory, defamatory, vulgar, pornographic, indecent, personality rights, damaging or similar nature in the nature of all kinds of financial content, legal, criminal and administrative responsibility for the content of the sender member / members are belong.
Related News