Political unrest in Turkey has once again spilled from the streets into the football stadiums of Turkey, as a pitch invasion marred the Beşiktaş-Galatasaray 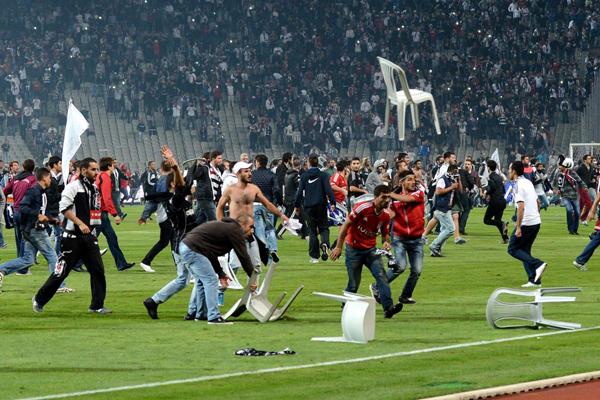 The match between two of Turkey’s greatest football giants was called off by the referee just two minutes before full-time while Galatasaray were 2-1 in the lead, after Galatasaray’s Felipe Melo was shown a red card for a reckless challenge against a Beşiktaş player. Beşiktaş fans invaded the pitch, chasing away players and officials, chanting politically motivated slogans directed against Turkey’s ruling AK Party. This follows a series of protests known as the Gezi Park riots which started as a demonstration against government plans to redevelop a popular park in Istanbul’s Taksim district, but quickly became a widespread rebellion against government. Heavy-handed tactics used by the Turkish police force to disperse the protestors inflamed many anti-government groups, who joined in the protests to express their displeasure with the authorities. These groups included gangs of football hooligans who are also upset with the government’s management of the country. Leading the way for these football hooligans were the fans of Beşiktaş, who are notoriously known in Turkey by the name of ‘Çarşı’.

However, the Çarşı gang has denied responsibility for Sunday’s pitch invasion, blaming it on a rival group of fans of the same team known as the ‘1453 Eagles’, who are believed to have been established to counter anti-government fans. Despite this, Çarşı maintain that the 1453 Eagles were responsible, an accusation the 1453 Eagles categorically denies. Nonetheless, whoever organized the pitch invasion did not shy away from shouting anti-government slogans such as ‘Everywhere is Taksim, everywhere is resistance!’ – a typical chant from the Gezi Park protests.

The pitch invasion sparked a range of angry comments from Turkish ministers and officials. On his Twitter account the AK Party representative in Gaziantep referred to them as ‘Vandals’. Furthermore, another the head of AK Party’s constitutional commission in the Turkish parliament Burhan Kuzu defended the Turkish police force from accusations that they used pepper spray to disperse the fans. Linking the pitch invasion to the events surrounding the Gezi Park, he said: ‘The police are trying to distance themselves from making the problem any worse, yet they have to cheek to accuse them of such actions. This is nothing but an attempt to revive the Gezi Park protests…and this attempt is an act of stupidity.’

Deputy Prime Minister Bülent Arınç has promised to take ‘radical measures’ to stop such behavior from taking place again. Another deputy Bekir Bozdoğan, claimed that the pitch invasion was coordinated by a radical group of terrorists who had infiltrated the stadium. This claim is supported by some eye-witness accounts of a group of fans, about 100 to 150 in number, who were detached from the game and seemed intent on causing trouble. They became enraged when red-carded player Melo taunted them, resulting in them breaking through the metal fences and onto the pitch.

In total 67 fans were detained, 12 of them minors. Each was handed a one-year ban from attending football matches after being released by the police.