It felt like everyone had been talking about it for days. It was like David Beckham’s foot pre-World Cup 2002 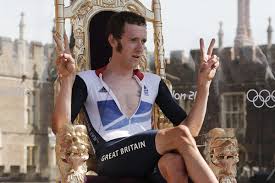 He described it as torture, saying it was the closest he would ever come to knowing what it was like to give birth. But in truth it was never in doubt. Sir Bradley Wiggins annihilated the UCI Hour record at the Olympic velodrome in London on Sunday night, his final mark of 54.526 kilometres beating the previous best of 52.937km, set by Essex’s Alex Dowsett in Manchester last month, by nearly two kilometres.

He is certainly the most versatile. And the most popular. The 6,000 ­tickets available for this spectacle sold out in less than 10 minutes and the atmosphere inside the velodrome was sensational from the first lap to the last.

Atmosphere was, in fact, the word of the day. It felt like everyone had been talking about it for days. It was like David Beckham’s foot pre-World Cup 2002 when suddenly we were all experts in metatarsals.