MPs to vote on 29 March no-deal exit from EU 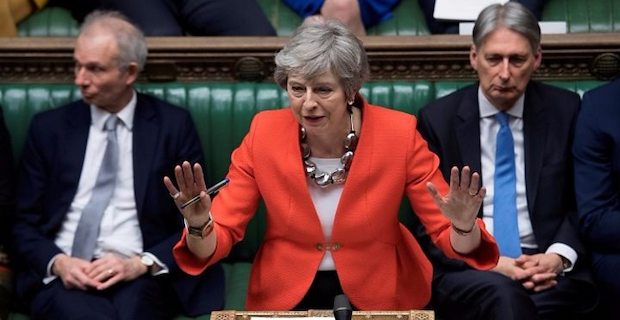 Wednesday's vote would not rule out the prospect of a no-deal exit later this year, if talks are extended but the UK is ultimately unable to agree a deal.

Theresa May's deal was defeated in the Commons again on Tuesday by 149 votes.

The EU's Michel Barnier said the UK must decide what it wanted and the risk of no deal had "never been higher".

He told the European Parliament the EU had gone "as far as it possibly can" and the proposed exit agreement, rejected by 391 to 242 votes, "will remain the only available treaty".

Ahead of the no-deal Commons vote, expected at about 19.00 GMT, the government announced that most imports into the UK would not attract a tariff in the event of a no-deal Brexit.

Under a temporary scheme 87% of imports by value would be eligible for zero-tariff access - up from 80% at present. Tariffs would be maintained to protect some industries, including agriculture.

The government also announced it will not introduce any new checks or controls, or require customs declarations for any goods moving from across the border from Ireland to Northern Ireland if the UK leaves the EU without a deal.

What is Wednesday's vote on?

MPs will vote on a government motion, which says: "This House declines to approve leaving the European Union without a withdrawal agreement and a framework on the future relationship on 29 March".

Mrs May, who is currently chairing a cabinet meeting, has said Tory MPs will get a free vote.

That means ministers and MPs can vote with their conscience rather than following the orders of party managers - an unusual move for a vote on a major policy.

Leaving the EU in 16 days' time remains the UK's default position under the law, unless talks are extended.

If no-deal is rejected, MPs will vote on Thursday on delaying Brexit by extending Article 50 - the legal mechanism that takes the UK out of the EU.

Keywords:
BrexitNo-deal Exit From EU
Your comment has been forwarded to the administrator for approval.×
Warning! Will constitute a criminal offense, illegal, threatening, offensive, insulting and swearing, derogatory, defamatory, vulgar, pornographic, indecent, personality rights, damaging or similar nature in the nature of all kinds of financial content, legal, criminal and administrative responsibility for the content of the sender member / members are belong.
Related News