The Met Office said storms Desmond, Eva and, most recently, Frank were behind the record rainfall, while a humid south-westerly airflow kept it warm. 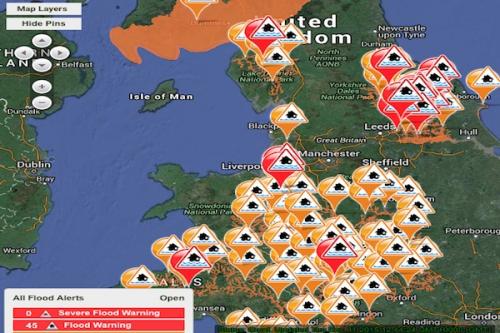 Scotland bore the brunt of Wednesday's bad weather, with many homes evacuated and others left without power. Despite largely drier forecasts for New Year's Eve, fears of further flooding remain with north-east Scotland at risk of heavy rainfall on Sunday and Monday.BP has ordered the evacuation of a North Sea oil platform after a barge broke its anchor after the storm. The company shut down production after the 110m-long barge began drifting towards the Valhall platform, a spokesman told Reuters. Several other rigs have also been evacuated.

Long-standing weather records have been smashed by a stormy, yet warm December, the Met Office's early figures suggest.

Scotland, Wales and the north-west of England all had the wettest December in more than a century.

A UK mean temperature of 8C (46F) broke records too and would have felt more like a day in April or May.

The Met Office said storms Desmond, Eva and, most recently, Frank were behind the record rainfall, while a humid south-westerly airflow kept it warm.