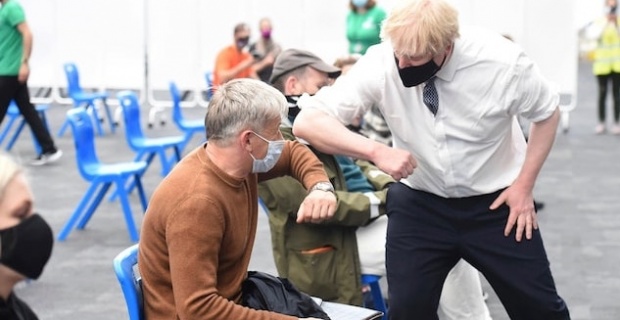 AA-Ahmet Gürhan Kartal | LONDON -Britain's prime minister has urged people who received two COVID-19 jabs to take the booster jab on Wednesday.Boris Johnson's invitation came a day after UK health authorities reported a record number of new daily infections of 117,093.Speaking to reporters at a vaccination center, Johnson said 90% of coronavirus patients receiving intensive care had not gotten their booster shots."I'm sorry to say this, but the overwhelming majority of people who are currently ending up in intensive care in our hospitals are people who are not boosted," he said."I've talked to doctors who say the numbers are running up to 90% of people in intensive care, who are not boosted," added Johnson, urging the 2.4 million double-jabbed people to take their third doses.He said: "If you're not vaccinated, you're eight times more likely to get into hospital altogether."So it's a great thing to do. It's very, very important. Get boosted for yourself, and enjoy New Year sensibly and cautiously."

Johnson warned that the omicron variant of coronavirus "continues to cause real problems" as cases are "rising in hospitals.""But, it is obviously milder than the delta variant and we are able to proceed in the way that we are," he added.Government data on Tuesday showed that more than 800,000 people had gotten infected in the past seven days, a 30.3% rise from the previous week.The highest increase of new cases was observed in London, Manchester, and Hertfordshire, according to the figures.British authorities said in various statements that they were constantly reviewing the scientific findings but ruled out any new measures and potential lockdowns until after New Year's Eve.Meanwhile, the number of people who received a third COVID-19 vaccine dose surpassed 32.5 million, whereas the number of those who have received two shots has reached 47 million across the country.The UK has the worst COVID-19 death toll across Europe with, 148,021 fatalities within 28 days of a positive test, according to the latest data.

Keywords:
LondonBooster JabTwo COVID19 JabsBritains Prime Minister
Your comment has been forwarded to the administrator for approval.×
Warning! Will constitute a criminal offense, illegal, threatening, offensive, insulting and swearing, derogatory, defamatory, vulgar, pornographic, indecent, personality rights, damaging or similar nature in the nature of all kinds of financial content, legal, criminal and administrative responsibility for the content of the sender member / members are belong.
Related News