Formula One world champion Michael Schumacher was fighting for his life on Monday after suffering severe head injuries in a skiing accident in the French Alps resort of Meribel, doctors said. 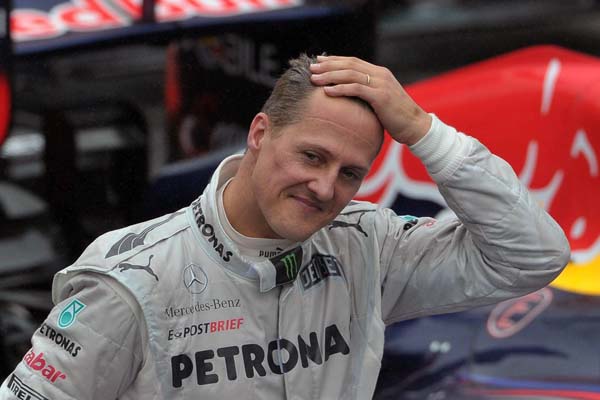 "We can say that his condition is life-threatening," Jean-Francois Payen, head anaesthetician at the CHU hospital in the eastern French city of Grenoble, told a news conference. "For the moment we cannot say what Michael Schumacher's future is," he added. "We are working round the clock - we are trying to win time." The retired motor racing great, 44, slammed his head on a rock while skiing off-piste on Sunday morning in the French Alpine resort where he has a vacation home. "His helmet did of course protect him at least partly. Someone who had suffered a similar accident without a helmet would not have made it here (to the hospital)," Payen said. Philippe Quincy, the Albertville public prosecutor, told Reuters an inquiry had been launched on Sunday to identify the causes of the accident. Initial findings indicated the blow was so hard that Schumacher's helmet had shattered. "We know that the accident took place in an off-piste zone where rocks were partly or totally hidden by snow," Quincy said, adding that Schumacher had likely been thrown off balance by one of them. Schumacher was initially conscious as he was transported to a local hospital in Moutiers and then to Grenoble. However, his condition deteriorated sharply afterwards.

Neurosurgeon Stephan Chabardes said an emergency brain scan carried out on Schumacher had revealed internal bleeding and injuries including contusions and lesions. He said they had operated to treat the internal bleeding.

Doctors said Schumacher had been placed in an artificial coma but, contrary to an earlier French media report, said they had not carried out a second operation during the night and were not planning any further interventions at this stage.

A spokesman for German Chancellor Angela Merkel said she was shocked to hear the news.

"We hope that he overcomes his injuries and can recover," the spokesman told a regular briefing in Berlin.