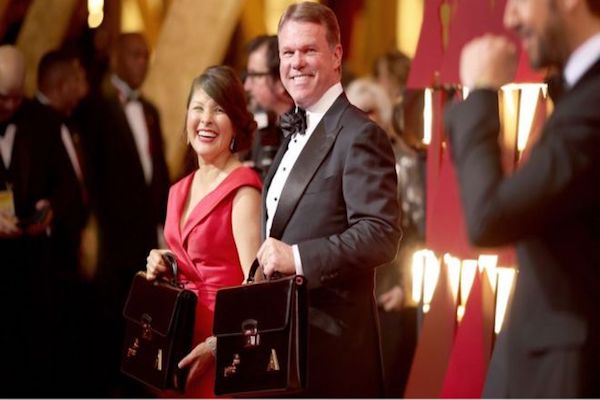 Its president, Cheryl Boone Isaacs, wrote in a letter to members that new rules will also mean electronic devices are banned backstage. PwC's Brian Cullinan was caught posting Twitter photos just before the mix-up. PriceWaterhouseCoopers counts the votes and organises the envelopes being handed out at the ceremony. Mr Cullinan was the accountant who gave the wrong envelope to actor Warren Beatty, resulting in the blunder at last month's ceremony.

Ms Boone Isaacs said: "From the night of the ceremony through today, PwC has taken full responsibility for the mistake. "After a thorough review, including an extensive presentation of revised protocols and ambitious controls, the board has decided to continue working with PwC." The firm's US chairman and senior partner Tim Ryan will now take a "greater oversight role" at future ceremonies.

A third person will also become part of PwC's on-site team at the Oscars. This individual will have knowledge of the award winners and will sit in the control room with the show's director throughout the event, she added. Just before the best picture announcement, Mr Cullinan tweeted a backstage photo of La La Land's best actress winner Emma Stone, minutes before handing presenters Beatty and Faye Dunaway the envelope for best actress in a leading role, rather than best picture.

Ms Boone Isaacs said Mr Cullinan's distraction caused the error. Mr Cullinan and his fellow PwC accountant Martha Ruiz were told they would never work at the Oscars again. It was the awards' most high-profile error since they began in 1929. PwC said the accountants made "a series of mistakes" and failed to follow established backstage protocols.