While Views of China Improve 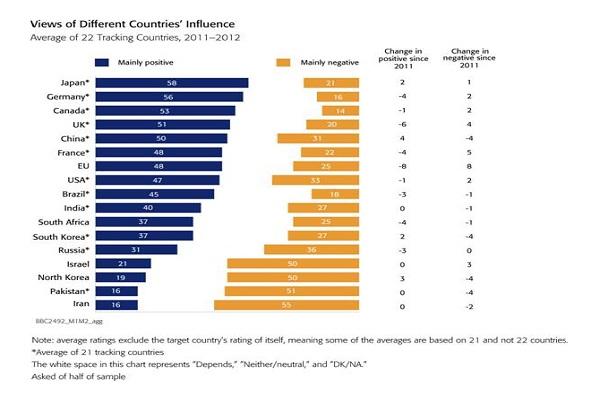 Positive views of the European Union and European nations have declined sharply over the last year—so much so that Germany has been overtaken by Japan as the world’s most positively viewed major nation, a new 22-country global poll for BBC World Service suggests.

The poll also finds that views of China have improved significantly over the last year, in both the developing and industrialised world, and that the country has now overtaken both the EU and the US. Views of the US overall remained similar to 2011 despite large shifts in some regions.

The 2012 Country Ratings Poll, conducted by GlobeScan/PIPA among 24,090 people around the world, asks respondents to rate whether the influence of each of 16 countries and the EU is “mostly positive” or “mostly negative.”

While in past years the EU has generally received quite positive ratings, this year positive views of the EU have dropped eight points on average, from 56 to 48 per cent, across the countries polled in 2011 and 2012. Ratings of other European nations dropped as well, with the UK down six points and France down four.

Germany, the most positively regarded nation last year, has seen its positive ratings drop from 60 to 56 per cent. This puts Germany in second place behind Japan, which is now rated most positively—by 58 per cent on average, up two points from last year. Canada (rated positively by 53%) and the UK (by 51%) are the third and fourth most positively viewed countries.

Positive views of China rose from 46 to 50 per cent on average. They jumped particularly sharply in the UK (up 19 points), as well as in Australia, Canada, and Germany (all up 18 points). These gains follow modest rises between 2010 and 2011. On average, views of the US have hardly changed, with 47 per cent expressing positive views and 33 per cent negative, compared to 48 and 31 per cent in 2010.

The most negatively rated countries were, as in previous years, Iran (55% negative), Pakistan (51% negative), and Israel and North Korea (both 50% negative).

GlobeScan President Chris Coulter comments: “The turmoil in the EU, long seen as an attractive bastion of political and economic stability, has raised doubts in people’s minds about its continued ability to be a global leader. Hopes are turning to China.”

Steven Kull, Director of PIPA, adds: “The fact that views of the EU itself had a sharper downturn than specific EU countries suggests doubts about how the EU is dealing with its collective problems.”

A total of 24,090 citizens across 22 countries were interviewed face-to-face or by telephone between December 6, 2011 and February 17, 2012. Polling was conducted for BBC World Service by the international polling firm GlobeScan and its research partners in each country, together with the Program on International Policy Attitudes (PIPA) at the University of Maryland. Countries were rated by half samples in all countries polled. In five of the 22 countries, the sample was limited to major urban areas. The margin of error per country ranges from +/- 2.9 to 4.9 per cent, 19 times out of 20.

The falls in positive ratings of the EU since 2011 were particularly marked in some countries. There were particularly sharp falls in Ghana (down 26 points), Indonesia (down 20 points), Chile (down 18 points), and Australia and South Korea (down 17 points each).