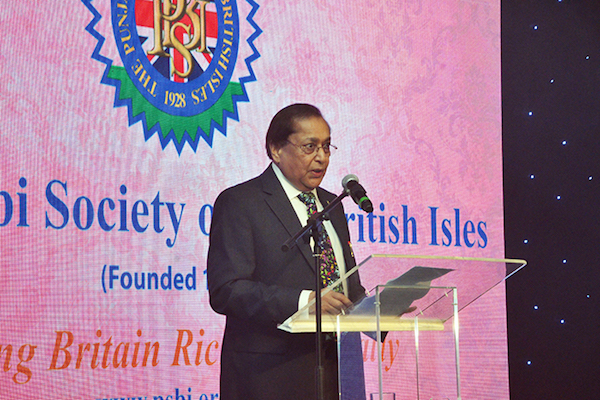 The Chief Guest at the spectacular event was the Rt. Hon. Sajid Javid PC MP, Secretary of State for Communities and Local Government and the Guest of Honour was H.E. Ambassador Dinesh Patnaik, Deputy High Commissioner of India to the United Kingdom. Over 450 distinguished guests attended the dinner including: Mr Richard Harrington MP, Member of Parliament for Watford and Parliamentary Under-Secretary of State for Pensions; Mr Virendra Sharma MP, Member of Parliament for Ealing-Southall and Lt. General Andrew Graham CB CBE, Chairman of the Armed Force’s charity ‘Combat Stress’.

Former President, Dr Rami Ranger CBE, now Patron of the PSBI welcomed the guests and spoke about the larger than life nature of the Punjabi peoples who are a proud and productive community that make Britain culturally richer. He added that vibrant Punjabi food, music, Bhangra and dresses have become an integral part of Britain with Punjabi being the second most spoken language of the nation. He further stated that as an outgoing President, it is his pleasant duty to pass on the baton to a young dynamic President, Dr Atul Pathak OBE. Adding that Atul is not only a successful entrepreneur but also a passionate servant of the community and country. He was confident that Atul will take the Society to the next level and wished him well in his endeavours.

Dr Atul Pathak OBE, current President of the PSBI spoke of the work hard, play hard lifestyle of the Punjabi community where they are not only some of the most respected and integral members of British society but have also added vibrancy to British culture with their friendly colourful sense of humour and fun loving nature. He added that the Punjabi community has assimilated well into British society and become part of its fabric. Dr Pathak also paid tribute to Dr Ranger for his sterling efforts and his great leadership; working hard as President of the PSBI, transforming the society into a successful and sustainable community organisation.

The Guest of Honour, His Excellency Ambassador Dinesh Patnaik, Deputy High Commissioner spoke of the Punjabi’s as being the pride of the global Indian diaspora and also of the countries in which they now reside. He spoke of the community as being big hearted and working hard for worthy causes to help shape a better society. He further elaborated that this year the Indian Government has decided to celebrate Vaisakhi as it was the 350th Birth anniversary of Guru Gobind Singh Ji and on 30th April at the SKLP Hall, Northolt, the High Commission along with various Gurdwaras will celebrate Vaisakhi as never before.

Chief Guest, the Rt. Hon. Sajid Javid PC, MP, Secretary of State for Communities and Local Government in his keynote speech spoke about his punjabi roots and his admiration for the culture he and his siblings (who were also present) were raised in. Giving accounts of his travels both personal and that as a Government Minister, he described the togetherness, caring and welcoming nature he has experienced from the global Punjabi family in which Punjabi’s from all walks of life show compassion to one another and others. He praised the Punjabi spirit of helping not only one another but also communities at large.

The Secretary of State’s keynote speech was followed by a presentation of the Pride of Punjab Awards to outstanding individuals who have brought honour to the Britain and the Punjabi community. The first of two recipients was Mr Virendra Sharma MP, Member of Parliament for Ealing-Southall and his citation was read by Mr Ashok Sharma, Finance Secretary of the PSBI. Upon receiving the award, Mr Virendra Sharma MP said he was touched by the honour from his own community and he too is proud of Punjabi values of caring and sharing.

The second recipient was Mr Surinder Arora, Founder and Chairman of the Arora Group whose citation was read by Mr Ajay Chadha, Executive Member of the PSBI. Mr Arora gave an account of his humble beginnings and how he owed everything to his late mother who helped him start the business. He reminded the guests that he could not imagine that one day he will be the owner of Renaissance Hotel at Heathrow where once he had worked as a waiter.

Lieutenant General Andrew Graham CB CBE then made an appeal on behalf of Combat Stress where he is Chairman. He spoke about the psychological trauma veterans face as a result service in combat and being away from home in largely hostile environments. The charity helps traumatised veterans better deal with service related stress and re-adjust better into civilian life. He praised Punjabi Community for their generous and continuous support. Lt. Gen. Graham also spoke about the special relationship his family has with the Punjabi community, his grandfather Lt-Colonel Sir John Noble Graham was awarded the Victoria Cross whilst supporting the 56th Punjabi Rifles in the Samarrah Offensive where the British fought against the Ottomans in the First World War; The following Sunday marked the 100th Anniversary since the end of battle.

Mr Anil Sharma, life member and Patron of the PSBI gave his vote of thanks in jovial spirit in which he thanked all present for making the evening a memorable one and helping support a worthy cause. He thanked the Executive Committee and Honoured Guests for their commitment. He particularly thanked the ladies for their support.