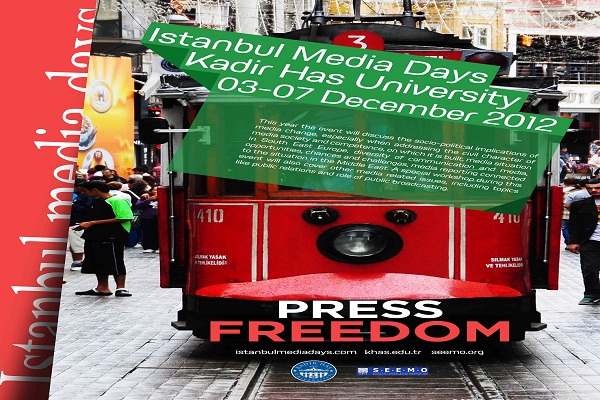 At the 'Istanbul Media Days 2012' which will take place on December 3-7 Cibali Hall at Kadir Has University's Cibali Campus will be the point where traditional and new media come together.

Among the speakers of the conference are Prof. Dr. Nabi Avcı, the chair of the Committee on National Education, Culture, Youth, and Sport in the 24th Period of Turkish Parliament; and Prof. Dr. Hasan Bülent Kahraman who is a columnist in Sabah Newspaper and also the Vice Rector of Kadir Has University as well as such renowned Turkish journalists as Mete Cubukcu (NTV), Nuri Colakoglu (CNN Turk) and Adem Gurses (ATV).

Dean of Faculty of Communication, Kadir Has University Prof. Dr. Deniz Bayrakdar, who organized IAMCR-Communication Conferene last year attended by 1500 participants from the field of communications from many countries stated: "Europe has been changing; media has played an active role in that change. Media has been a position of both constituting and gathering content. Media has been inverted at the same time. At this conference intention will be to find answers to questions such as 'What happened to traditional media? Who are the new content suppliers? How are we able to interwave the traditional and new one?'