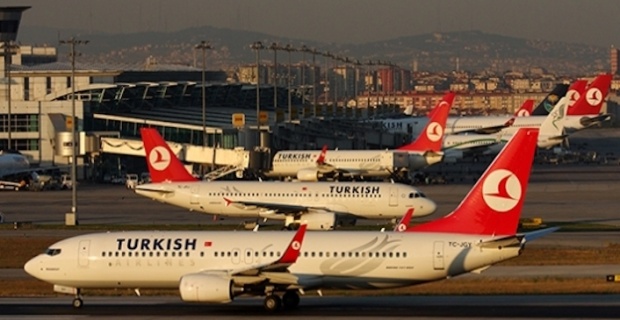 Some 41.3 million people traveled through airports in Turkey between this January and March, the country’s airport authority announced on Friday.

First quarter figures were down 4.2% percent from the same period last year, according to the General Directorate of the State Airports Authority.

The number of international passengers rose 7.5% on a yearly basis in the first three months of 2019 to reach 16.7 million.

Istanbul's Ataturk Airport remains the busiest in Turkey, serving 107,072 planes -- likely to be soon eclipsed by the new mega-Istanbul Airport, where operations are currently moving.

Ataturk Airport was followed by Sabiha Gokcen Airport -- Istanbul's main air hub on the city’s Asian side -- with 54,557 planes, and the capital Ankara's Esenboga Airport with 25,804 planes.

At a full annual capacity of 200 million passengers -- with the completion of all four phases with six runways by 2028 -- Istanbul Airport is set to become a global aviation hub hosting more than 100 airlines and flights to over 300 destinations around the world.

Keywords:
Istanbul AirportTurkish AirportsIstanbul Ataturk Airport
Your comment has been forwarded to the administrator for approval.×
Warning! Will constitute a criminal offense, illegal, threatening, offensive, insulting and swearing, derogatory, defamatory, vulgar, pornographic, indecent, personality rights, damaging or similar nature in the nature of all kinds of financial content, legal, criminal and administrative responsibility for the content of the sender member / members are belong.
Related News