Turkey brings back 349 more citizens from UK amid pandemic 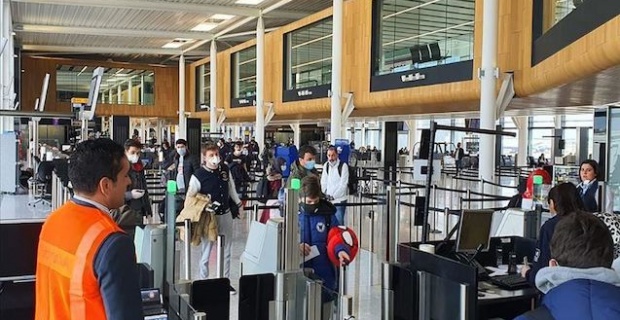 Avrupa Times/London-Turkey evacuated nearly 350 more of its citizens from the U.K. on Friday with a special flight in the midst of the coronavirus pandemic. A specially arranged Turkish Airlines flight left London’s Heathrow Airport at 11.40 a.m. local time with 349 students and citizens who were in this country temporarily. Turkish Ambassador to London Umit Yalcin told Anadolu Agency that around 1,000 Turkish citizens were flown back to Turkey on March 24, a week after all flights to Turkey were grounded due to the coronavirus outbreak worldwide.Underlining that the latest special flight was arranged at the directives of Turkish President Recep Tayyip Erdogan, Yalcin said the flight will make it possible for Turkish citizens to spend the holy month of Ramadan at home.

Yalcin said students, tourists, businessmen, lorry drivers and workers who had temporary visa to remain in the U.K. but applied to the embassy to be able to go back to Turkey for the Muslim holy month of Ramadan are being repatriated.

“Our London embassy and Edinburgh chief consulate are working non-stop on this organization in cooperation with Turkish Airlines,” Yalcin added.

The citizens who returned to Turkey today will be placed under a 14-day quarantine in line with country’s strict measures to stem the spread of the virus.

Emre Eseceli, a student from Southampton University, said he could not catch the special flights on March 24, but he later applied to the embassy to go back to Turkey.

Thanking the Turkish state and diplomats, Eseceli said they would be able to “spend the Eid al-Fitr in their country with their families.”

Turkey’s Foreign Minister Mevlut Cavusoglu said on social media Wednesday that Turkish citizens who were abroad on temporary visas would be repatriated with President Erdogan’s directive in the shortest time possible after quarantine conditions are prepared in Turkey. Cavusoglu wrote on Twitter that 25,000 Turkish citizens have been brought back to Turkey from 70 countries so far.

Keywords:
TurkeyUK
Your comment has been forwarded to the administrator for approval.×
Warning! Will constitute a criminal offense, illegal, threatening, offensive, insulting and swearing, derogatory, defamatory, vulgar, pornographic, indecent, personality rights, damaging or similar nature in the nature of all kinds of financial content, legal, criminal and administrative responsibility for the content of the sender member / members are belong.
Related News