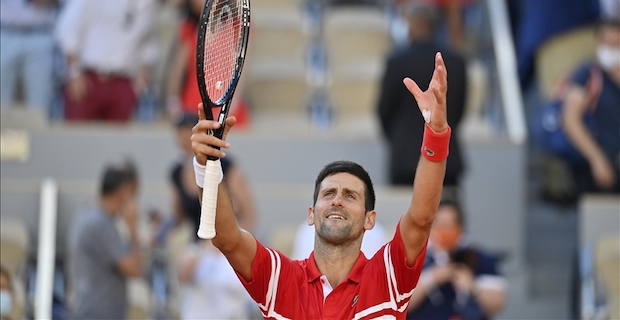 He won his first Grand Slam title at the 2008 Australian Open at the age of 20.

In 2011, he won three out of four Grand Slams, capturing the Australian Open, Wimbledon and US Open in the same season.

He has reached 29 Grand Slam finals and played the final of each Grand Slam tournament at least six times -- an all-time record.

Being one of the most cherished tennis players of all time, Djokovic has faced off against the best players many times.

His biggest rivalry is thought to be with Spain’s Rafael Nadal, who has been nicknamed "the King of the Clay" for playing especially well on clay courts.

In their latest match at the semifinals of the French Open, marking their 58th meeting, Djokovic eliminated his opponent 3-6, 6-3, 7-6 and 6-2.

Nadal, 35, has claimed a record 13 French Open titles in his career, including 20 Grand Slam championships.

He shares the most Grand Slam tournament wins with Swiss tennis legend Roger Federer with 20 titles.

Djokovic versus Federer is another great rivalry in tennis.

In their last clash, Djokovic bested Federer in five sets at the 2019 Wimbledon.

Djokovic has more wins against Federer than any other player in their 50 matches against each other.

Federer has appeared in a whopping 31 Grand Slam finals.

He is also the first men's singles player to have reached 10 consecutive Grand Slam finals.

With Wimbledon and the US Open to go in 2021, Djokovic has the chance to make history by becoming the player with the most Grand Slam titles if he wins both tournaments.

He would also be the first men’s tennis player to win all four Grand Slams in the same year, after Australia’s Rod Laver in 1969.

Keywords:
Novak DjokovicTennisFrench Open
Your comment has been forwarded to the administrator for approval.×
Warning! Will constitute a criminal offense, illegal, threatening, offensive, insulting and swearing, derogatory, defamatory, vulgar, pornographic, indecent, personality rights, damaging or similar nature in the nature of all kinds of financial content, legal, criminal and administrative responsibility for the content of the sender member / members are belong.
Related News