Wimbledon: Djokovic into third round 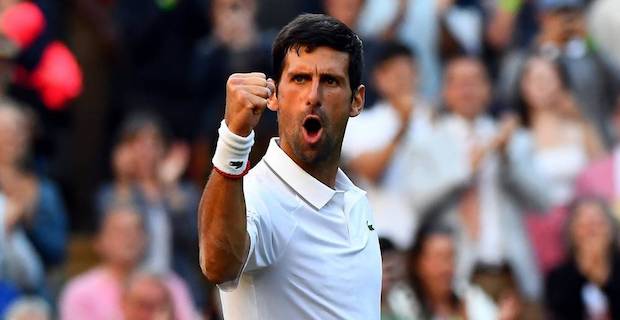 Novak Djokovic and Kevin Anderson and Karolina Pliskova and Simona Halep advanced to the third round of the men’s and women’s singles events Wednesday at Wimbledon. The number one seed Djokovic faced Denis Kudla from the U.S., ranked at No. 111 in the world, on the Central Court. Djokovic defeated his opponent 6-3, 6-2 and 6-2. The Serbian player will next meet Poland’s Hubert Hurkacz.

Meanwhile, 22nd-seeded Stan Wawrinka from Switzerland lost to American Reilly Opelka 7-5, 3-6, 4-6, 6-4 and 8-6 and bid farewell to the tournament in the second round.

The 21-year-old Opelka, who qualified for the third round for the first time in a grand slam tournament, will play against Canadian Milos Raonic.

Fifth-seeded Dominic Thiem was beaten by American Sam Querrey and eliminated in the first round Tuesday.

Second-seeded Naomi Osaka was eliminated in the first round on Monday.

Keywords:
WimbledonNovak DjokovicDenis Kudla
Your comment has been forwarded to the administrator for approval.×
Warning! Will constitute a criminal offense, illegal, threatening, offensive, insulting and swearing, derogatory, defamatory, vulgar, pornographic, indecent, personality rights, damaging or similar nature in the nature of all kinds of financial content, legal, criminal and administrative responsibility for the content of the sender member / members are belong.
Related News