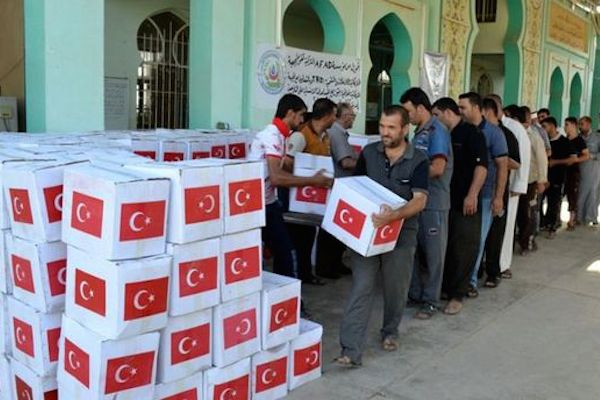 The Turkish Red Crescent organization on Wednesday delivered an emergency aid consignment to the embattled Gaza Strip, according to an official at the Turkish Red Crescent's office in Gaza.
"A shipment of 4,000 boxes of baby diapers entered the Gaza Strip through the Rafah border terminal [with Egypt]," Emad Abu Matar told Anadolu Agency.
"Dozens of other consignments of food and medical supplies will soon be delivered to Gaza through the Karam Abu Salem border crossing [with Israel]," he added.
An Egypt-brokered cease-fire went into effect on Tuesday, ending 51 days of relentless Israeli attacks on the Gaza Strip in which 2,143 Palestinians were killed and over 10,000 injured – the vast majority of them civilians. Thousands of homes across the embattled strip, meanwhile, were partially or completely destroyed by the onslaught. The cease-fire deal calls for opening all border crossings between the Gaza Strip and Israel – effectively signaling the end of Israel's seven-year blockade of the coastal enclave. The cease-fire formally came into effect as of 16:00 GMT Tuesday. For the past eight weeks, Israel has pounded the Gaza Strip – from air, land and sea – with the stated aim of halting rocket fire from the Palestinian territory. Since Israel's "Operation Protective Edge" began on July 7, at least 69 Israelis – 64 soldiers and five civilians – have been killed, according to Israeli figures. The number of Palestinian fatalities from Israel's recent offensive has surpassed the combined death toll from two previous campaigns against Gaza, including Israel's 21-day "Operation Cast Lead" in 2008/09 in which at least 1500 Palestinians were killed.
By Hedaya al-Saidi