WN, The release came a day after the European Union lifted all sanctions on Myanmar excluding an arms embargo 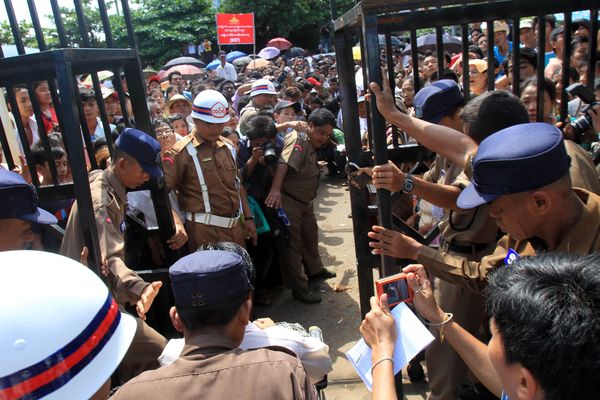 Myanmar's president announced an amnesty on Tuesday for about 100 prisoners, a senior official said, 56 of whom were confirmed as political detainees by a group monitoring activists held in the country's jails. The release is the latest in a series of amnesties decided by reformist President Thein Sein and came a day after the European Union lifted all sanctions on Myanmar excluding an arms embargo. Bo Kyi, of the Assistance Association for Political Prisoners (AAPP), told Reuters the group had confirmed the release of 56 political prisoners from five jails. According to AAPP, 176 remain in detention. More than 800 political prisoners were freed in amnesties between May 2011 and November 2012. Previous releases of prisoners of conscience, as they are often known, coincided with reviews of Western sanctions or high-level visits, such as that by Thein Sein to Washington last September and U.S. President Barack Obama's landmark trip to Myanmar two months later.

"At key international moments the government releases a few political prisoners instead of releasing them all immediately," said Mark Farmaner, director of Burma Campaign UK.

"Almost all the laws used to put the political prisoners in jail are still in place."

The EU's decision to lift sanctions was criticised by rights groups for ignoring Myanmar's continuing human rights abuses, including the imprisonment of political activists and the persecution of Rohingya Muslims in western Myanmar's Rakhine State.

Human Rights Watch released a report the same day sanctions were lifted accusing state authorities of the ethnic cleansing of Rohingya Muslims after violence broke out in June and October last year, leaving at least 125,000 people displaced and 211 people dead.