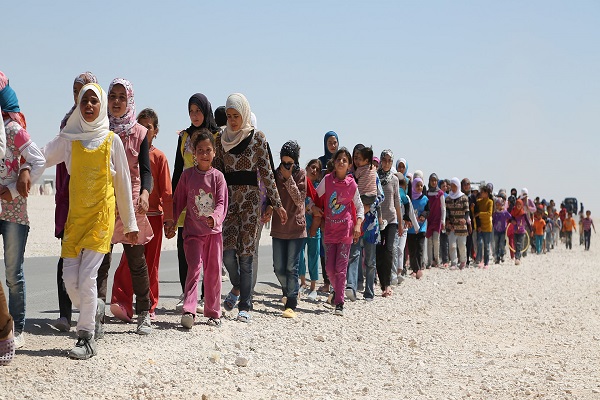 The recent announcement that Britain will take some 20,000 Syrian refugees during the term of the current parliament, whilst in itself hardly a ‘swarm’ in the grand scheme of things, it nevertheless shows that when pushed, our government have a tendency to buckle under the strain of EU diktat. Granted that Germany have absorbed a considerable number of these displaced peoples recently, but they have more room to accommodate them and, given the relatively low birth rate amongst indigenous German’s the argument seems to be that these people can be utilized productively. ‘Cheap labour’ in other words, which is precisely that status ‘enjoyed’ by Turkish immigrants in Germany for decades.

This column writer has a particular affection for Syria by virtue of a fairly brief but quite dramatic posting to Damascus some 16 years ago which involved conducting runway surveys on Syrian air facilities including Damascus International Airport. At the time and possibly since that occasion, this was the first instance where a Westerner had access to airside aviation facilities in Syria. A wholly unique experience that was not without drama! The historic sites were equally dramatic for different reasons.

Overall, one developed a feeling for the people many of whom had been and still were, a suppressed people under what has become the ‘dynastic kleptocracy’ of the Assad Regime. Assad senior was still in power in 1999: His death in June of 2000 brought his eldest son Bashir to the ‘throne’. Despite promising beginnings, things are now as we see them and with the dubious assistance of Moscow, Syria burns and millions are fleeing from their ancestral homes perhaps never to return.

If we accept that these people have a vital need to re-settle, not all those surging towards the west are so well intentioned. There is a very real danger that Da’esh (IS/ISIL) will infiltrate those fleeing to the perceived nirvana of the western world, with their own ‘murder cells’ intent on wreaking havoc within the shores of Europe and Great Britain. To this end, it is wise that the government have decided to continue to take people who are already in established camps in Turkey rather than adopting some form of selection process at Calais where you simply could not know what you are going to end up with! It is furthermore the case, as we have seen in Eastern Europe of late, that whole armies of young men are attempting to swarm westward and it is highly unlikely that these are fleeing for their lives; indeed, some might have committed dreadful crimes themselves and are escaping their just punishment!

That such numbers are propelling themselves in our direction is hugely concerning, the human catastrophe notwithstanding. These people are not going to ‘fit in’ here; intuitively, they ‘hate’ the West largely because they have been taught to do so and many will wish to destroy us from within. The sight of minarets across the Thames at London and the imposition of Sharia Law are spectres that many will espouse as good enough reasons to deny entry. It is not an unreasonable fear to hold. Surely there are Muslim countries closer to where these refugees are running from that should accommodate them? What, for example is Saudi Arabia doing for these folk? Compared to Lebanon, Jordan and Turkey – precisely nothing and this needs to be addressed and soon, at UN level.

In the meantime, the campaign for Britain to leave the EU is growing a-pace and this movement is enthusiastically supported by this column. Ironically, the migrant question is unwittingly fanning the fire favourably towards the NO-Vote and despite what those clever pollsters may like to think, it is highly likely that those of us who are patriots and who despise our country being governed by an unelected foreign entity – the EU – will win the day in 2017. We will NOT, despite the Europhiles protestations otherwise, lose any trade or business opportunities at all but on the contrary, as we will have chosen the Open Seas (as endorsed by Winston Churchill) we will secure even more non-EU, international trade. “Trade at all Costs, but not at any price” has long been a mantra of this column and so it will continue.

To conclude, on April 25th 1968, a speech was made by a certain politician in Birmingham. It was to pass into the annals of history more for its press-induced infamy than the prophetic statement that it was. The words uttered were right for the times and they resonate now: “Looking forward, I am filled with much foreboding. I am like the Roman viewing the River Tiber foaming with much blood”. (Christopher J. Green)