The EFJ-IFJ will report the new violations to the Council of Europe’s Platform for the protection and safety of journalists and to the Mapping media freedom project. 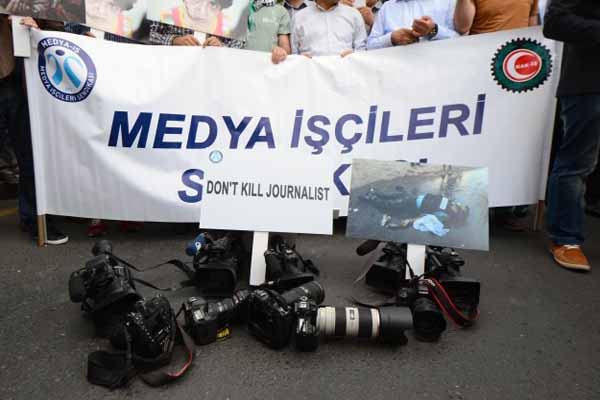 According to media reports and local trade unionists, journalists and freelance media workers reporting on labour issues for the daily Evrensel Gazetesi and the news channel Hayat Televizyon haveon 29/06/2015 and the following days been attacked, threatened with weapons and kidnapped because they were covering Turkish workers strike in the metal industry. Over six million workers in the big Turkish metal industry are currently shifting their affiliations to selected trade union organisations and some of them are running strikes in different working places (Renault, Fiat, Ford,…) to defend their rights.

“We have recorded that unidentified individuals have used fire arms at the door of Arzu Erkan’s house which can be interpreted as threat. She is member of TGS and is working as correspondent for Evrensel Gazetesi in Kocaeli. Other freelance correspondents for Evrensel and Hayat TV are under pressure. All the attacks and pressures must stop immediately, journalists and media workers must not be intimidated for doing their reporting”, said Mustafa Kuleli, TGS General Secretary.

“The correspondents of Evensel Gazetesi have been attacked during the past days just because they were following the strikes of workers in the metal industry. Many workers are leaving a specific trade union to join the fight to defend their rights”, said Kivanç Eliaçik from DISK confederation.

“Those attacks are against the struggle of the working class, against the freedom of expression and against our right to access information. We strongly protest against those attacks and we call on the authorities to immediately investigate in order to prosecute all responsibles”, said the Board of directors of KESK confederation in a press release. The bar association of Ankara representing the lawyers has also published a message to support Evrensel journalists.

The EFJ-IFJ will report the new violations to the Council of Europe’s Platform for the protection and safety of journalists and to the Mapping media freedom project.