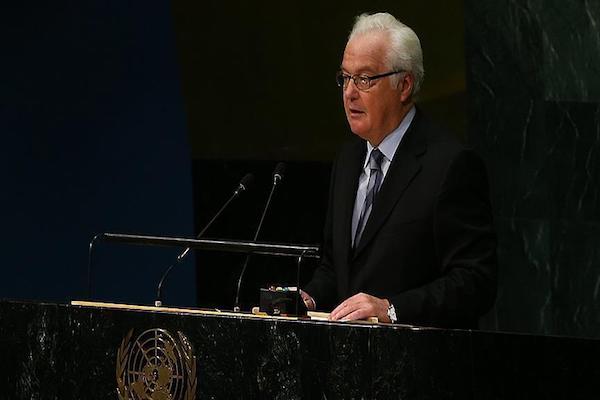 Guterres dubbed Churkin as an “outstanding diplomat”, in a statement.

Churkin died "suddenly in New York on February 20, a day ahead of his 65th birthday”, according to a statement issued by the Russian foreign ministry

“The outstanding Russian diplomat died in harness," it said. "We offer sincere condolences to the family of Vitaly Ivanovich Churkin."

Russian President Vladimir Putin and Prime Minister Dmitry Medvedev also expressed condolences to the Churkin family and praised the diplomat for his service.

A cause of death has yet to be determined but an unnamed U.S. official told The Associated Press Churkin died of an apparent heart attack.

Churkin served as UN ambassador since April 8, 2006. His veto as a permanent member of the Security Council prevented action on the Syrian and Ukrainian crises on numerous occasions.

News of Churkin's death hit the UN headquarters during a session and was met with shock.

A UN official who announced the news to the session said: "He was a dear colleague of all of us, a deeply committed diplomat of his country and one of the finest people we have known."

U.S. ambassador to UN, Nikki Haley said she and Churkin did not “always see things the same way, but he unquestionably advocated his country's positions with great skill”.

Former U.S. ambassador to UN, Samantha Power, who often argued against and criticized Churkin on critical issues, tweeted she was "devastated" by his the death of the "diplomatic maestro" who was a "deeply caring man" who did all he could to bridge differences between Washington and Moscow.