Snap poll found 57% of voters believe Boris Johnson should resign, and 75% believe he had knowingly lied 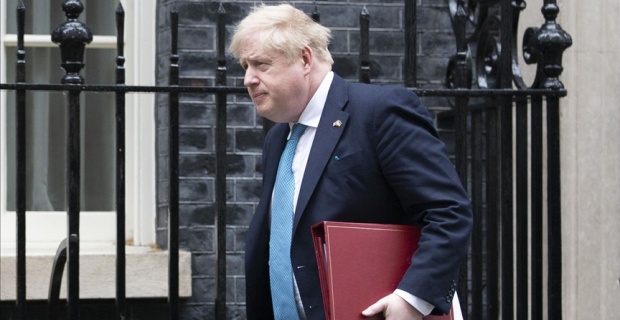 A lawmaker on Wednesday became the first member of the ruling Conservative Party to call on British Prime Minister Boris Johnson to quit after he was fined by police for attending a lockdown-breaking party.   Nigel Mills, a backbench MP, told local media: “I think for a prime minister in office to be given a fine and accept it and pay it for breaking the laws that he introduced ... is just an impossible position.” "I don't think the PM (prime minister) can survive or should survive breaking the rules he put in place,” he added. Lord David Wolfson, a justice minister in Johnson’s Cabinet, also quit his role today over the breaches of COVID-19 regulations in Downing Street. In an open letter to Johnson, Lord Wolfson wrote: "I regret that recent disclosures lead to the inevitable conclusion that there was repeated rule-breaking, and breaches of the criminal law, in Downing Street. "I have - again, with considerable regret - come to the conclusion that the scale, context and nature of those breaches mean that it would be inconsistent with the rule of law for that conduct to pass with constitutional impunity." He concluded: "I am very sorry that the sky has prematurely fallen in on my current ministerial career, but I have concluded that, consistently with both my ministerial and professional obligations to support and uphold the rule of law, I have no option other than to tender my resignation."

Transport Secretary Grant Shapps, however, backed the prime minister. He told Sky News: "I'm not saying that the prime minister isn't a flawed individual - we're all flawed in different ways, we all err. "The question is did somebody set out to these things with malice? And actually overall is he doing a good job as prime minister? "He made a mistake - it was embarrassing and stupid, the prime minister's mortified about it. But I think there's a big job for him to get on and do - on behalf of the British people and on behalf of the world fighting this cruel war."

Rachel Reeves, shadow chancellor for the opposition Labour Party, told the same TV channel: "Britain deserves better than this prime minister and this chancellor who lie and lie and lie and can't stick to the rules that they tell everybody else are so essential." Johnson received a fine from the police on Tuesday for attending a birthday party held for him in June 2020 in Downing Street while the rest of the country was in lockdown. His wife Carrie Johnson and Chancellor Rishi Sunak were also fined for attending the same event. All three paid the fine, believed to be £50 ($65), and apologized. The police have so far issued over 50 fines as a result of their ongoing investigation into lockdown-breaking parties in Downing Street and government. Twelve gatherings are being investigated by the police, and Johnson has been reported to have attended six of them – and he has not ruled out being handed further fines. The full version of the government commissioned investigation into the parties by leading civil servant Sue Gray is also yet to be published as she is awaiting the end of the police investigation. A heavily redacted summary was published earlier this year. A snap poll by YouGov found 57% of voters believed Johnson should resign, and 75% believed he had knowingly lied.