Those who commit alcohol-fuelled crimes will be ordered to stop drinking, to wear tags monitoring alcohol intake 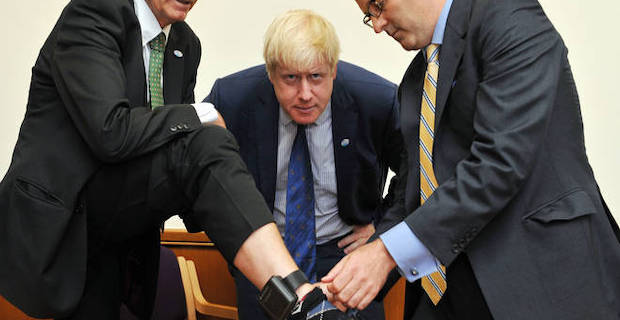 A new policing measure that may ban those committing booze-fuelled crime from consuming alcohol and monitor the ban via sweat analyzing tags has come into force on Tuesday in the UK. According to the new measure, the British courts will be able to order offenders to stop drinking and to wear the monitoring tag for up to four months. “The ankle tags, which are to be rolled out across England and Wales, perform around-the-clock monitoring of an offender’s sweat to determine whether alcohol has been consumed,” according to a statement by the government. If the person wearing the “sobriety tag” drinks at any point of the alcohol ban and breach the alcohol abstinence order, “they can be returned to court for further sanctions.”  “These might range from a fine, extending the length of the order or in some cases imprisonment,” the statement said.  Two pilots “showed offenders were alcohol free on 97% of the days monitored.”

Tag wearers “also reported a positive impact on their lives, wellbeing and behaviour.” The tag will be available across the country later this year. An estimated 39% of violent crime involves an offender under the influence of alcohol -- with the social and economic cost of alcohol-related harm being £21.5 billion ($26.3 billion) per year, according to the government.  The technology works by fitting a tag around the ankle of an offender. This then “samples their sweat every half-hour to determine whether alcohol has been consumed.” They can distinguish between alcohol-based products, such as hand sanitizer, that could be used to mask alcohol consumption and can detect when contact between the skin and the tag has been blocked.

“Alcohol-fuelled crime blights communities and puts an unnecessary strain on our frontline services,” Crime, Policing and Justice Minister Kit Malthouse MP said. He added: “Smart technologies like sobriety tags not only punish offenders but can help turn their lives around. “While prison will always be the right place for many criminals, tough community sentences like this can help cut reoffending and protect the public.”

Keywords:
UKSobriety Tag
Your comment has been forwarded to the administrator for approval.×
Warning! Will constitute a criminal offense, illegal, threatening, offensive, insulting and swearing, derogatory, defamatory, vulgar, pornographic, indecent, personality rights, damaging or similar nature in the nature of all kinds of financial content, legal, criminal and administrative responsibility for the content of the sender member / members are belong.
Related News