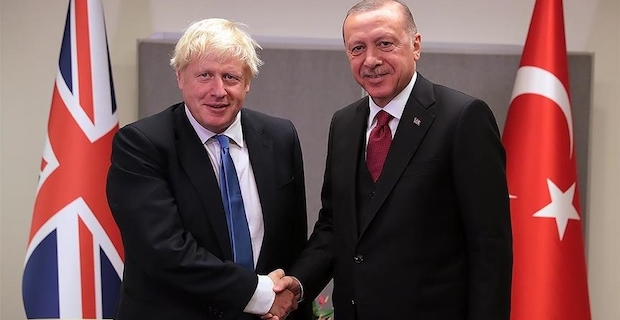 The two leaders also spoke of the importance of cooperating together with the international community to bring peace and stability to Afghanistan following the takeover of the country by the Taliban and to ensure that evacuations continue without any serious incidents.

“The prime minister spoke to Turkey’s President Recep Tayyip Erdogan today about the crisis in Afghanistan. They discussed the importance of the international community working together to stabilize the situation and support Afghans in the country and in the region,” said a statement from Downing Street.

“The leaders shared the view that any new government must be representative of Afghanistan’s diverse population and protect the rights of women and minorities, and that the Taliban would be judged by their actions, not their words, on this,” the statement added.

The two leaders also agreed that nations must commit themselves to burden-sharing on aid and refugees following the Taliban’s takeover, as well as the anticipated mass migration of many Afghans. Johnson and Erdogan also agreed on the importance of the United Nations in coordinating any efforts to prevent a human rights catastrophe.

The UK premiere and Turkish president also discussed bilateral ties and agreed to intensify UK-Turkey cooperation in trade and leading the fight against climate change ahead of the COP26 conference which will be held next month in the UK.

The Turkish government has taken a pragmatic approach to the recent events in Afghanistan. On Wednesday, Erdogan welcomed the moderate statements made by Taliban officials and announced that Turkey is ready to cooperate with all parties to ensure peace and stability.

Erdogan said that Turkey’s military’s presence in the country will strengthen the new Afghan administration’s hand in the international arena. The Turkish president also announced that Turkish troops would protect Kabul airport and ensure that evacuations continue in a safe and peaceful manner.

Keywords:
Recep Tayyip ErdoganBoris JohnsonBritish Prime Minister
Your comment has been forwarded to the administrator for approval.×
Warning! Will constitute a criminal offense, illegal, threatening, offensive, insulting and swearing, derogatory, defamatory, vulgar, pornographic, indecent, personality rights, damaging or similar nature in the nature of all kinds of financial content, legal, criminal and administrative responsibility for the content of the sender member / members are belong.
Related News