Prime Minister Boris Johnson has been in self-isolation since last week, when he announced he tested positive for COVID-19 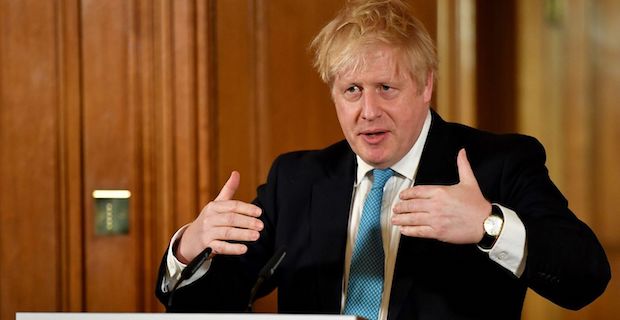 U.K. Prime Minister Boris Johnson was admitted to hospital Sunday after testing positive for the novel coronavirus last week, with the symptoms failing to disappear. A Downing Street spokesperson said: “On the advice of his doctor, the Prime Minister has tonight been admitted to hospital for tests." “This is a precautionary step, as the Prime Minister continues to have persistent symptoms of coronavirus ten days after testing positive for the virus.  “The Prime Minister thanks NHS [National Health Service] staff for all of their incredible hard work and urges the public to continue to follow the Government’s advice to stay at home, protect the NHS and save lives.”

On March 27, Johnson tweeted: “Over the last 24 hours I have developed mild symptoms and tested positive for coronavirus. I am now self-isolating, but I will continue to lead the government’s response via video-conference as we fight this virus.” Johnson, 55, was due to end his seven days of self-isolation last Friday, but his high temperature persisted and so he remained in self-isolation. The Sun reported on Friday that the government aides had said Johnson was "coughing and spluttering" on video conference calls over the last few days. British health authorities announced on Sunday that the U.K.-wide death toll from coronavirus rose by 621 in 24 hours.  The Department of Health said there were now 47,806 positive cases, and 4,934 deaths. More than 1.2 million cases of coronavirus have been confirmed worldwide, according to data compiled by Johns Hopkins University. Some 68,400 people died after contracting the virus, while 258,500 recovered after treatment. Since appearing in Wuhan, China, last December, the novel coronavirus has spread to at least 183 countries and territories.

Keywords:
Boris JohnsonUKCoronavirus
Your comment has been forwarded to the administrator for approval.×
Warning! Will constitute a criminal offense, illegal, threatening, offensive, insulting and swearing, derogatory, defamatory, vulgar, pornographic, indecent, personality rights, damaging or similar nature in the nature of all kinds of financial content, legal, criminal and administrative responsibility for the content of the sender member / members are belong.
Related News