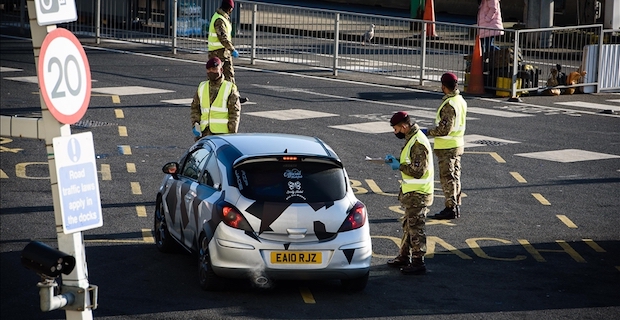 A British government minister on Tuesday refused to rule out a return to local lockdowns amid an increase in cases of Indian coronavirus variant. “We cannot rule anything out, but our preferred outcome is that we really double down and get the vaccination rates up," Environment Secretary George Eustice told Sky News.

The main opposition Labour Party, which up until now has been wholly supportive of the government in the pandemic, said it was “wary” of a return to local or area-based lockdowns.

The party's shadow housing secretary Lucy Powell said local lockdowns “didn't really work out last time, but they became incredibly difficult and divisive for those areas that were put in early lockdown" such as Bolton and Blackburn towns in the northwest of England.

“Let's get that surge vaccination, that surge testing capacity very, very quickly into these areas. And hopefully we'll be able to see some of this off.”

He said there are 2,323 confirmed cases of the Indian COVID-19 strain in the UK, 483 of which are from Bolton and Blackburn.

Lockdown restrictions in England were further eased on Monday, with the government allowing people to hug each other, limited indoor gatherings to take place, as well as limited foreign travel and holidays.

The next and final round of lockdown easing is due on June 21, but that is now at risk.

Meanwhile, a new research by University College London shows that over 96% of Brits developed antibodies after just a single dose of either the AstraZeneca or Pfizer vaccines. This increased to almost 100% after receiving a second jab.

Britain’s vaccination program relies heavily on both AstraZeneca and Pfizer, which the study found were equally good at creating antibody responses.

It said 96.42% of the people inoculated with either vaccine developed antibodies between 28 and 34 days after the first dose. This increased to 99.08% between seven and 14 days after the second dose.

Dr Maddie Shrotri, the lead author of the research, said: “This is one of the earliest real-world vaccine studies in the UK and it is fantastic news ... how well these vaccines work is remarkable, especially given the speed at which they’ve been developed. It’s a real feat of science in the face of the most devastating pandemic in a century.”

Keywords:
UKCOVID-19COVID-19 VaccineIndian Variant
Your comment has been forwarded to the administrator for approval.×
Warning! Will constitute a criminal offense, illegal, threatening, offensive, insulting and swearing, derogatory, defamatory, vulgar, pornographic, indecent, personality rights, damaging or similar nature in the nature of all kinds of financial content, legal, criminal and administrative responsibility for the content of the sender member / members are belong.
Related News