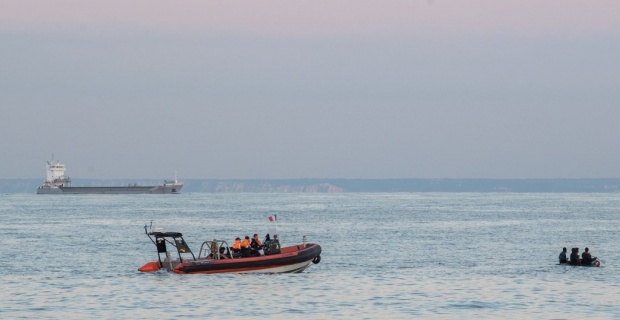 British Home Secretary Priti Patel announced on Monday that she asked the Ministry of Defense to put the navy in charge of policing small boats crossing the Channel from France to the UK.   Patel told parliament that “no one department” could solve the Channel crossing issue, adding: “My decision to bring the MoD in is vindication that we need to absolutely strengthen our defences in the Channel.”  She said that “it matters not which countries” migrants are sent to, with local media speculating Rwanda and other African countries could be considered as locations for offshore asylum processing centers.

Education Secretary Nadhim Zahawi told Sky News that it was a “good idea” to have a single command and control that “that includes not just naval vessels but all other vessels, including Border Force, so that you actually have a co-ordinated operation in terms of the small boats.”

The coordination was necessary, he said, to “go after the illegal smugglers who are putting these people's lives at risk”.

"The way you do it is a multi-pronged strategy, so you have got co-ordination on the Channel, you've got the Nationality and Borders Bill and implementing that properly and then you've got legal routes for migration,” he said.

The Nationality and Borders Bill currently making its way through parliament would criminalize entering the UK without a visa, as well as allowing the government to strip an individual’s citizenship without telling them.

The announcement to toughen up security on the Channel comes as scandal-hit British Prime Minister Boris Johnson, who has faced widespread calls to resign, reportedly pledged to throw more ‘red meat’ to his backbench MPs, who have often complained about the migrant crossings issue.

Late last year, local media reported that migrant boats would be pushed back.

According to a statement from the Home Office at the time, the UK’s border force staff were being trained to use “turn-around” tactics at sea to prevent migrants on boats from reaching the coast.

The move was condemned by France, with then French Interior Minister Gerald Darmanin saying at the time: "Safeguarding human lives at sea takes priority over considerations of nationality, status and migratory policy, out of strict respect for the international maritime law governing search and rescue at sea.”

Keywords:
Royal NavyChannel
Your comment has been forwarded to the administrator for approval.×
Warning! Will constitute a criminal offense, illegal, threatening, offensive, insulting and swearing, derogatory, defamatory, vulgar, pornographic, indecent, personality rights, damaging or similar nature in the nature of all kinds of financial content, legal, criminal and administrative responsibility for the content of the sender member / members are belong.
Related News