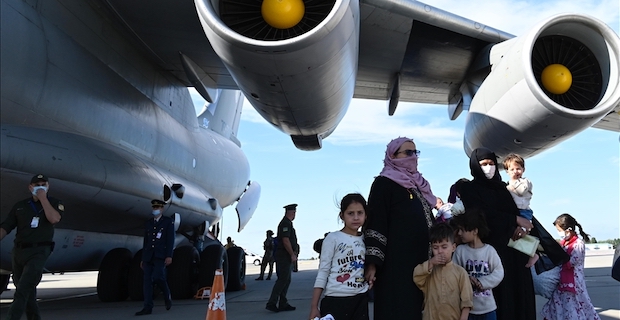 Britain’s foreign secretary urged the international community on Monday to work together to ensure that Afghans eligible to leave Afghanistan be given passage out of the country.

Dominic Raab made the plea during a high-level meeting chaired by the US that included Qatar, Turkey, NATO and the European Union as well G7 partner nations. He said the Taliban would be judged on their actions rather than words after having made promises and reassurances.

“This afternoon, the Foreign Secretary Dominic Raab joined a meeting with counterparts from the US, Canada, the EU, France, Germany, Italy, Japan, NATO, Qatar and Turkey about the situation in Afghanistan,” a statement from the Foreign Office said.

“The Foreign Secretary emphasized the importance of working with like-minded partners on safe passage and exit arrangements for eligible Afghans remaining in the country,” it added.

During the virtual meeting, Raab also discussed “strategic priorities” to prevent Afghanistan from becoming a haven to terrorist groups and to ensure the country’s access to humanitarian aid and the protection of human rights following the US and NATO-led coalition’s defeat in the 20-year conflict.

The foreign secretary also expressed his gratitude for the efforts of the international community in evacuating thousands of Afghans in the previous two weeks. Raab also ensured that despite the conclusion of the UK’s evacuation mission, the government will continue processing those Afghans eligible to leave and enter the UK.

“The Foreign Secretary also welcomed the participants’ unity of purpose and close collaboration on a wider new strategy for Afghanistan,” the statement said.

Uncertainty and insecurity are rising in the Afghan capital Kabul following a terrorist attack last week that killed over 100 people, including three British nationals and 13 US servicemen. The attack was claimed by the Daesh/ISIS terrorist group’s Afghan affiliate ISIS-K.

The US retaliated by ordering drone strikes on Daesh/ISIS targets in Kabul, which the US says were planning further attacks. US drone strikes on Sunday, however, are reported to have killed a number of children.

The US deadline to end all evacuations is fast approaching, with only Tuesday left for those Afghans seeking to leave the country. The Taliban have said that their forces will establish control over the airport on Wednesday once US forces have left Kabul.

Keywords:
UKAfghan Evacuation
Your comment has been forwarded to the administrator for approval.×
Warning! Will constitute a criminal offense, illegal, threatening, offensive, insulting and swearing, derogatory, defamatory, vulgar, pornographic, indecent, personality rights, damaging or similar nature in the nature of all kinds of financial content, legal, criminal and administrative responsibility for the content of the sender member / members are belong.
Related News