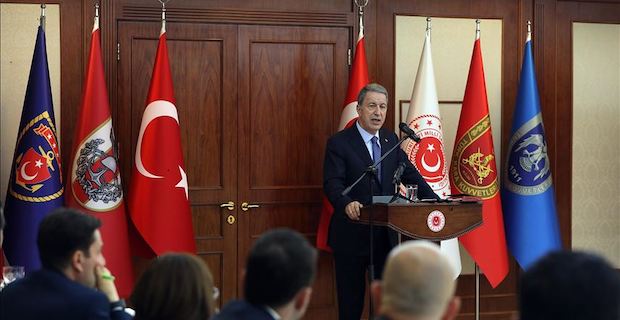 Turkish military personnel are currently receiving training in Russia for the use of the S-400 air defense system, Turkey’s defense minister told reporters in Ankara.

"We’ve sent personnel to Russia for S-400 training that will begin in the coming days and will span the following months," Hulusi Akar said on Tuesday.

"We need to set up an air defense system to protect our 82 million people and our country," Akar said, stressing that Turkey was under threat of air and missile attacks from Syrian borders.

Underlining that the S-400 systems only had defense capabilities, he said "no one should be bothered" by their use by Turkey.

Akar emphasized that the F-35 fighter jet were developed under an ongoing joint project, noting that Turkey had military personnel in the U.S. to receive training and for the planes’ maintenance.

"We as the Republic of Turkey fulfill our responsibilities in a serious and sincere manner," he said, adding that the jets would later be deployed in Turkey’s eastern Malatya province.

Tensions between the U.S. and Turkey have reached a fever pitch in recent months with Turkey set to begin receiving the advanced S-400 surface-to-air missile system from Russia.

U.S. officials have suggested Turkey buy the U.S. Patriot missile system rather than the S-400, arguing it is incompatible with NATO systems and is a threat to the F-35 fifth-generation stealth aircraft.  Turkey responded it was the U.S. refusal to sell Patriots that led it to seek other sellers, adding that Russia offered a better deal, including technology transfers.

The proposal came during his visit to France with Turkish President Recep Tayyip Erdogan, he said, adding that a deal could be reached in the coming period as a symbol of "Turkish-French goodwill".

He added that such a deal would be dependent on Erdogan’s approval.

Akar underlined that Turkey had "neutralized" more than 15,000 terrorists in the past four years.

Turkish authorities often use the word "neutralize" in their statements to imply that the terrorists in question were killed or captured.

In its more than 30-year terror campaign against Turkey, the PKK -- listed as a terrorist organization by Turkey, the U.S. and the EU -- has been responsible for the death of some 40,000 people, including women and children.

Akar also noted that over 16,000 government officials had been dismissed from their posts since July 15, 2016 and added that 7,335 suspects were under investigation for their ties to the Fetullah Terrorist Organization (FETO), the group behind the 2016 defeated coup, according to judicial authorities.

He said 1,567 military personnel had also been dismissed from the Turkish Armed Forces.

Keywords:
Turkish MilitaryS 400
Your comment has been forwarded to the administrator for approval.×
Warning! Will constitute a criminal offense, illegal, threatening, offensive, insulting and swearing, derogatory, defamatory, vulgar, pornographic, indecent, personality rights, damaging or similar nature in the nature of all kinds of financial content, legal, criminal and administrative responsibility for the content of the sender member / members are belong.
Related News