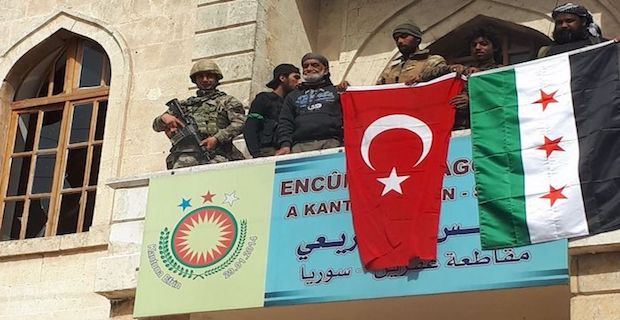 Avrupa Times/Afrin-Erdogan said, "We will have to take necessary steps to rebuild Afrin, raise infrastructure and wipe out traces of terrorists," he said, adding: "Turkish, Free Syrian Army’s flags are hoisted in Afrin town center.""We are not there to occupy but to wipe out terror groups and to achieve peace in Afrin," Erdogan added.Turkish General Staff, in a written statement, said search for mines, improvised explosive devices are in progress in the town.According to Anadolu Agency correspondents on the ground, the troops entered the town center at around 5 a.m. local time (GMT0200) from east, west and north sides.During the entrance, some mines placed by terrorists at entry points of the district exploded as  FSA fighters advanced into the the town center, it was learned.Without encountering any kind of resistance, they took complete control of the town center.

The improvised explosive devices (IEDs) and mines are currently being defused. Utmost care is being taken to not harm any civilians.YPG/PKK terrorists -- before the beginning of Operation Olive Branch -- held civilians hostage at the town center, in a bid to use them as human shields.However, the ongoing operation forced so-called leaders of the terrorist group camped at Mount Qandil to flee, leaving behind a few terrorists who impersonated civilians by wearing their clothing. Saturday's action led to the liberation of 12 villages, cleared the last terrorist stronghold Mabatli village and encircled the city centre from three sides -- forcing the remaining terrorists to flee the area.

Turkey on Jan. 20 launched Operation Olive Branch to remove PYD/PKK and Daesh terrorists from Afrin. According to the Turkish General Staff, the operation aims to establish security and stability along Turkey's borders and the region as well as protect Syrians from terrorist cruelty and oppression.

Keywords:
Turkish Armed ForcesSyrias AfrinAfrin Town CenterOlive BranchPYD PKKDaesh Terrorists
Your comment has been forwarded to the administrator for approval.×
Warning! Will constitute a criminal offense, illegal, threatening, offensive, insulting and swearing, derogatory, defamatory, vulgar, pornographic, indecent, personality rights, damaging or similar nature in the nature of all kinds of financial content, legal, criminal and administrative responsibility for the content of the sender member / members are belong.
Related News