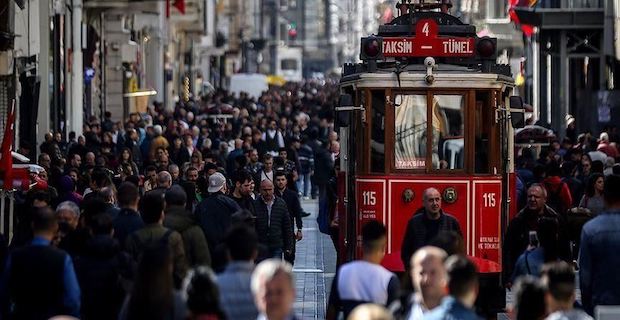 Some 92.8% of Turkey’s population are living in cities and district centers – up 0.5 percentage points annually – versus 7.2% in towns and villages.Turkey's population density – the number of people per square kilometer – surged 2 people on a yearly basis to reach 107 last year. The population of Istanbul, the most crowded city, rose 451,543 people to reach over 15.5 million people as of the end of 2019. The city makes up 18.66% of Turkey's total population. "Number of people per square kilometer was 108 for Turkey and 2,987 for Istanbul," the institute said. The world-famous metropolis was followed by the capital Ankara with 5.64 million inhabitants and the Aegean province of Izmir with 4.37 million people.

Bursa, a key industrial province, was Turkey's fourth-biggest city by population with 3.05 million inhabitants, and the Mediterranean resort city of Antalya came fifth with 2.5 million.

Located in eastern Turkey, Tunceli was the least-populous province with 84,660 people, followed by the northeastern city of Bayburt (88,843) and Ardahan in the northeast (97,319).

Keywords:
TurkStatTurkeys Population
Your comment has been forwarded to the administrator for approval.×
Warning! Will constitute a criminal offense, illegal, threatening, offensive, insulting and swearing, derogatory, defamatory, vulgar, pornographic, indecent, personality rights, damaging or similar nature in the nature of all kinds of financial content, legal, criminal and administrative responsibility for the content of the sender member / members are belong.
Related News