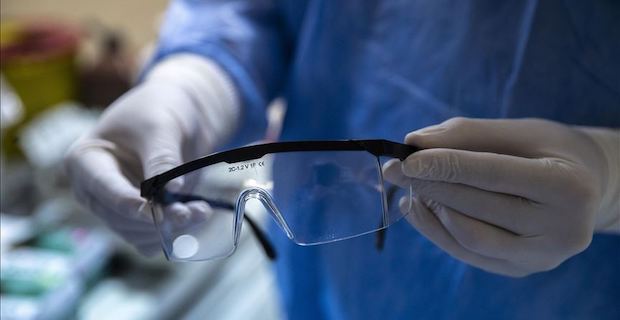 Turkey’s effective fight against the coronavirus and low statistics on related deaths despite a massive population of 83 million have recently received praise from the British media.  Sky News, one of the leading news channels in the UK, told its viewers that Turkey has superbly managed one of the worst health crises the world has witnessed thanks to a very effective track and trace system by its Health Ministry.  The news report also mentioned Turkey’s early detection and effective treatment of COVID-19.

“Let’s be proud of our doctors and health system,” Health Minister Fahrettin Koca said Thursday on Twitter, sharing a video clip from Sky News’ special report on Turkey’s success in the fight against COVID-19. 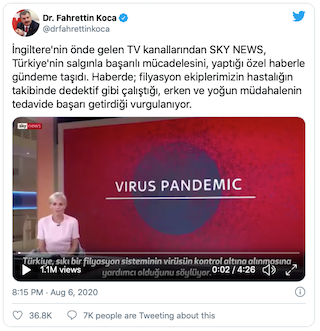 Koca said some circles described the ministry’s success during the pandemic as “Turks’ propaganda on Turks,” but “you will watch Brits’ Turkey propaganda on Brits in a short time,” before sharing the Sky News report.

The report called the Turkish ministry’s thousands of track and trace team members “COVID-19 detectives” and said that much of the country's success in containing the disease has been put down to these 8,500 tracer teams made up of 16,300 “detectives.”

“Turkey has managed to test millions of people for the virus and has registered more recoveries from the disease than infections for the past four weeks on the trot.

“One of the country's leading doctors told Sky News that Turkey's relatively low mortality rate is down to the extensive testing and tracing network, as well as aggressive treatment in the early stages of the disease,” it said.

The news channel also compared the COVID-19 death rates in Turkey and the UK.

“The official number of COVID-19 deaths in the country [Turkey] is under 6,000 in a population of 83 million – this compares with the UK's 46,000 deaths, despite having a smaller population of 66 million.”

The news report also said that at the peak of the pandemic, “Istanbul was the country's epicenter.”

“But test and trace teams started work immediately when the first COVID-19 patient was diagnosed on 11 March.”

The report also praised early detection of the disease and effective use to treat patients with hydroxychloroquine and remdesivir pills in a few days, as well as the country’s newly built modern hospitals.

Turkey on Thursday confirmed 1,040 more recoveries from the novel coronavirus, raising the tally to 220,546, according to the country's health minister.

Citing Health Ministry data, Fahrettin Koca said a total of 1,153 people contracted COVID-19 over the last 24 hours, bringing the total number of cases in the country to 237,265.

The country's death toll from the disease rose to 5,798, with 14 new fatalities over the past 24 hours.

Healthcare professionals conducted more than 54,494 tests for COVID-19 over the past day, raising the tally to over 5.08 million.

The UK has the highest death toll in Europe with more than 46,000 fatalities.

Keywords:
CoronavirusCOVID-19Sky NewsFahrettin Koca
Your comment has been forwarded to the administrator for approval.×
Warning! Will constitute a criminal offense, illegal, threatening, offensive, insulting and swearing, derogatory, defamatory, vulgar, pornographic, indecent, personality rights, damaging or similar nature in the nature of all kinds of financial content, legal, criminal and administrative responsibility for the content of the sender member / members are belong.
Related News