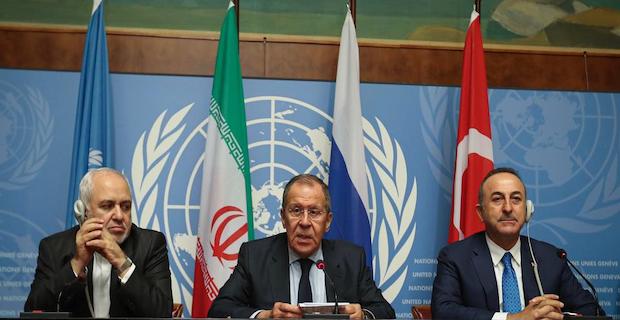 The foreign ministers of Turkey, Russia and Iran reaffirmed their strong commitment to the sovereignty, independence, unity and territorial integrity of Syria in a joint statement Tuesday. They issued the statement as guarantor states of the Astana process on the peaceful settlement of the Syrian crisis ahead of the first meeting of the Constitutional Committee of Syria, which consists of government, opposition and civil society members.

They expressed their conviction that the launch of the Constitutional Committee proved "there could be no military solution to the Syrian conflict."

They said they were committed to advancing a viable and lasting Syrian-led and Syrian-owned and UN-facilitated political process in line with UN Security Council resolution 2254, which was backed by all members of the Security Council. 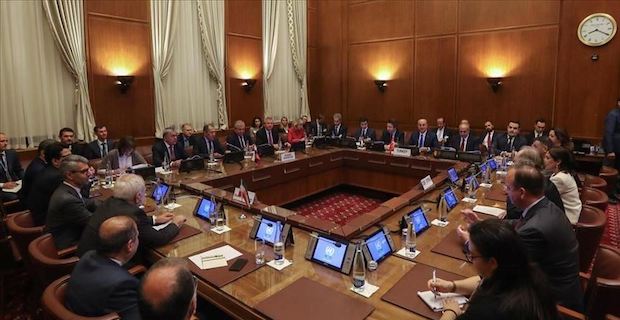 Cavusoglu said Turkey believes its Russian partners regarding the withdrawal of the YPG from the safe zone area in northern Syria but felt otherwise about the terrorists.

"Russia informed us that PKK/YPG elements left. We have to believe our Russian partners, but we cannot trust terrorists," Cavusoglu said at the press conference in Geneva with his Russian and Iranian counterparts.

He said the launch of talks for a new Syrian constitution is a huge step forward.

Ankara and Moscow reached a deal on Oct. 22 under which YPG/PKK terrorists will pull back 30 kilometers (18.6 miles) south of Turkey's border with northern Syria within 150 hours and security forces from Turkey and Russia will conduct joint patrols there.

"This is a huge joint victory," said Lavrov, noting that there were "a lot of difficulties" to get to the start of the constitutional committee, which confirms the "commitment to the territorial integrity of Syria."

"There is no military solution for the Syrian conflict," said Lavrov.

Zarif agreed that the constitutional committee is the beginning of "a very difficult process."

"The commission must be Syrian-owned and led and must be acceptable to the Syrian people," he said, and not "foreign-led."

"We insist on the territorial integrity of Syria, and the armed forces of Syria should control it," said Zarif.

Keywords:
SyriaTurkeyRussiaIranGeneva
Your comment has been forwarded to the administrator for approval.×
Warning! Will constitute a criminal offense, illegal, threatening, offensive, insulting and swearing, derogatory, defamatory, vulgar, pornographic, indecent, personality rights, damaging or similar nature in the nature of all kinds of financial content, legal, criminal and administrative responsibility for the content of the sender member / members are belong.
Related News