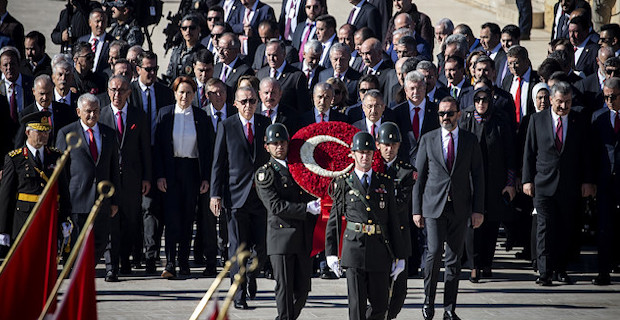 Historic opening of new airport in Istanbul is a symbol of power, determination and 95 years' achievements of Turkey, President Recep Tayyip Erdogan said on Monday, as the country marked 95th anniversary of the Republic Day.

“Today, we are celebrating the 95th anniversary of our republic by opening the new airport in Istanbul, one of the most prestigious projects in the world,” Erdogan wrote in the Anitkabir memorial book.

The opening ceremony of the first phase of one of the largest airports in the world will kick off at 4.30 p.m. local time (1330GMT) with the attendance of Erdogan and several leaders from around the world.

The official proclamation of the Turkish Republic by Ataturk took place on Oct. 29, 1923 when the name of the nation and its status as a republic were declared.

A vote then took place in the Grand National Assembly and Ataturk, a revolutionary statesman, was elected first president of the Republic of Turkey by a unanimous vote.

Since then, Turkey celebrates Republic Day every year on Oct. 29.

Keywords:
President Recep Tayyip ErdoganMustafa Kemal AtaturkTurkish Republic
Your comment has been forwarded to the administrator for approval.×
Warning! Will constitute a criminal offense, illegal, threatening, offensive, insulting and swearing, derogatory, defamatory, vulgar, pornographic, indecent, personality rights, damaging or similar nature in the nature of all kinds of financial content, legal, criminal and administrative responsibility for the content of the sender member / members are belong.
Related News