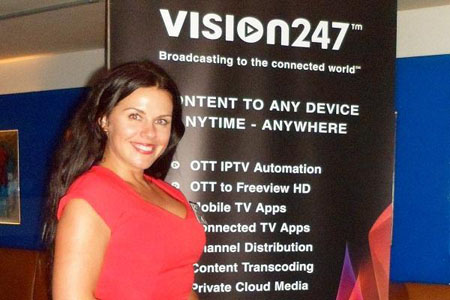 • Subscription and free-to-air live TV and video on demand

Vision247 today announced the availability of the  Vision247  through a free-to-download app for Roku’s LT and 2 XS streaming players. With the Vision TV Network app downloaded from the Roku Channel  Store, Roku  customers  will have access to a world of live 24/7 international television channels.

The Roku streaming player is an easy-to-use and cost-effective way for anyone to enjoy internet TV and video.  With a Roku streaming player, a high-speed internet connection and a television, UK viewers can be up and running in a matter of minutes,  and with the Vision TV Network app downloaded to the player, customers will have instant access to up to 37 channels of broadcasting from Poland, Greece, Turkey and France, with more  countries to follow.

John Mills, CEO of Vision247, said: “Roku is a name synonymous with simple and cost-effective access to TV and on-demand services over the internet. This perfectly gels with our intent for the Vision TV Network, to bring high-quality international television broadcasts to expatriate communities in the UK in an easy, straight forward manner.”

Clive Hudson, vice president and general manager for Europe at Roku said: “As on-demand television become increasingly popular in the UK, consumers are looking for more and more content to stream to their televisions. International channels are proving very popular in the UK and with the addition of the Vision TV Network app we hope to continue to expand our multilingual offering.”

Broadcasters can use Vision247’s platform to customise programme schedules and enable personalised programming and advertising.  Vision 247 actively monitors content streaming to ensure that broadcasts are of the highest possible quality and reliability, delivering an unrivalled user experience.

Proving a huge success in the US, where it has served in excess of a billion streaming hours, Roku players are now available throughout the UK. Subscription channel packages for Vision TV Network are available online and are valid for both PCs and Roku streaming players with an allowance of up to four simultaneous sessions for each subscriber