Trump thanks Erdogan for averting catastrophe in Idlib 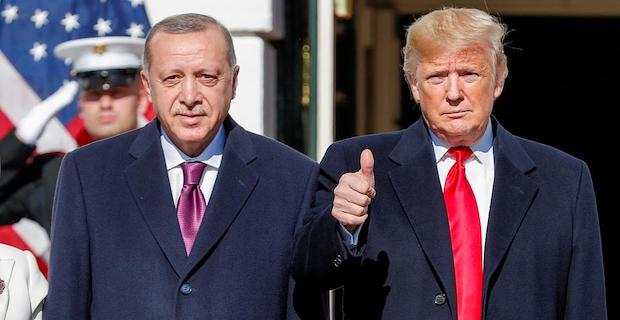 "President Trump also reiterated that continued foreign interference in Libya would only serve to worsen the situation," he added.

Turkish troops are in Idlib as part of an anti-terror and peace mission.

But more than 1,800 civilians have been killed in attacks by regime and Russian forces since, flouting a 2018 ceasefire and a new one that began on Jan. 12.

Libya's legitimate government has been under attack by renegade military commander Khalifa Haftar since last April, claiming the lives of more than 1,000 people.

Since the ouster of late ruler Muammar Gaddafi in 2011, two seats of power have emerged in Libya: one in eastern Libya supported mainly by Egypt and the United Arab Emirates, and the other in Tripoli, which enjoys UN and international recognition.

Keywords:
ErdoğanIdlibTrump
Your comment has been forwarded to the administrator for approval.×
Warning! Will constitute a criminal offense, illegal, threatening, offensive, insulting and swearing, derogatory, defamatory, vulgar, pornographic, indecent, personality rights, damaging or similar nature in the nature of all kinds of financial content, legal, criminal and administrative responsibility for the content of the sender member / members are belong.
Related News