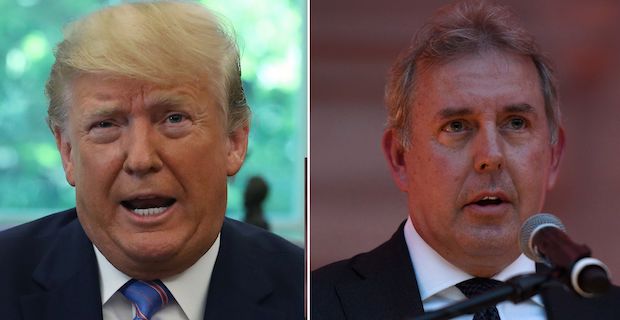 U.S. President Donald Trump on Sunday slammed the U.K.'s ambassador to Washington Kim Darroch over leaked emails to the media where he insulted the "dysfunctional" Trump administration.  "We don't really believe this administration is going to become substantially more normal; less dysfunctional; less unpredictable; less faction-riven; less diplomatically clumsy and inept," said the British envoy in his emails to officials in London.

His secret explosion to Trump included words like "insecure" and "incompetent".

A source from the U.K. government confirmed the authenticity of emails to CNN. The cables were first leaked to and published by the Daily Mail in the U.K.

"We are not big fans of that man and he has not served well to the UK. I can tell you that," Trump told reporters.

"I can say things about him but I won't bother," Trump added.

Darroch informed U.K. officials that Trump's "career could end in disgrace," and used the term "knife fights" to describe the political situation within the White House, according to the Daily Mail.

The controversial leaks came just weeks after the Queen hosted Trump and his family with a 41-gun salute and a State banquet at Buckingham Palace.

The U.K. has yet to make a statement on the issue.

Keywords:
Donald TrumpKim Darroch
Your comment has been forwarded to the administrator for approval.×
Warning! Will constitute a criminal offense, illegal, threatening, offensive, insulting and swearing, derogatory, defamatory, vulgar, pornographic, indecent, personality rights, damaging or similar nature in the nature of all kinds of financial content, legal, criminal and administrative responsibility for the content of the sender member / members are belong.
Related News