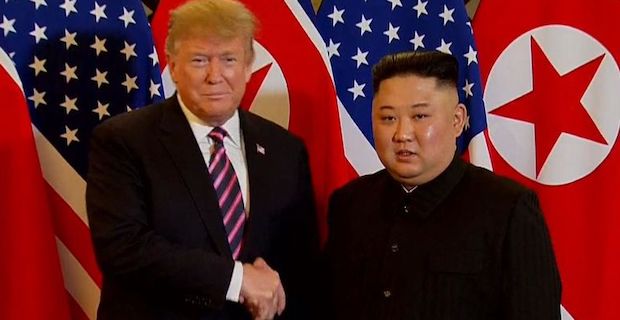 U.S. President Donald Trump met North Korean leader Kim Jong-un in Hanoi on Wednesday for a summit to discuss denuclearization of Korean peninsula and lifting of sanctions on Pyongyang.

According to Seoul-based Arirang TV, Trump reached the Metropole Hotel at around 6.15 p.m. local time (1115 GMT) followed by Kim who reached a few minutes later.

The two leaders are scheduled to have “one-on-one meeting for 20 minutes followed by a social dinner which will be joined by top aides of,” the Arirang reported.

Before Trump and Kim departed for private chat, the U.S. president told reporters he shares a “great relationship” with Kim.
“This [summit] will be very successful, possibly “even greater” than first summit, Trump said referring to historic summit held in Singapore last June.

“I’m satisfied with how things had gone so farm” he said when asked about the pace of progress towards denuclearization.

“There has been a lot of progress in the relationship between the U.S. and North Korea,” he added.

Kim, who spoke after Trump, said “a lot of obstacles” had to be overcome for the summit to take place but he is “confident there will be a good result.

“Much time and consideration was needed for a satisfying result,” Arirang quoted the North Korean leader.

The two leaders are holding a news conference tomorrow.

Keywords:
TrumpNorth Korean LeaderSummit In VietnamUS PresidentKim Jong-un
Your comment has been forwarded to the administrator for approval.×
Warning! Will constitute a criminal offense, illegal, threatening, offensive, insulting and swearing, derogatory, defamatory, vulgar, pornographic, indecent, personality rights, damaging or similar nature in the nature of all kinds of financial content, legal, criminal and administrative responsibility for the content of the sender member / members are belong.
Related News