Trump, I do not need congressional approval to hit Iran

'I do like keeping them abreast, but I don’t have to do it legally,' says president of lawmakers 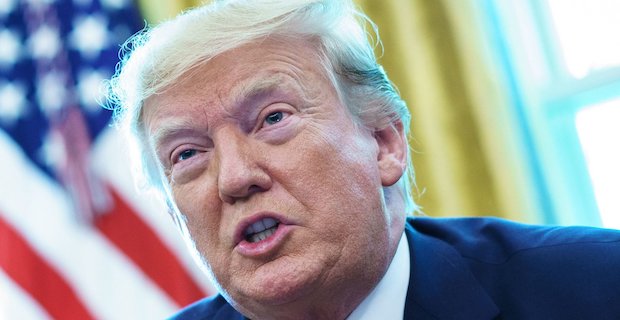 U.S. President Donald Trump said Monday that he does not have to get congressional approval to strike Iran.  "I do like keeping them abreast, but I don’t have to do it legally," Trump said during an interview with The Hill news site, referring to lawmakers.  "They’re intelligent people. They'll come up with some thoughts. I actually learned a couple of things the other day when we had our meeting with Congress.”  His remarks came as a response to House Speaker Nancy Pelosi, who said Friday that the president must have the authority of Congress before Washington launches military action against Iran.

"I disagree. Most people seem to disagree," said Trump.

Trump said Friday the U.S. was "cocked & loaded" to strike three Iranian sites in retaliation for Iran's downing of a U.S. drone, but he said he called off the attacks over concern they would have been a disproportionate response.

Roughly 150 Iranians would have been killed in the attacks, he said.

The Congressional green light for a president to use military action against Iran has lately been a matter of debate among lawmakers.

According to CNN, Republican Sen. Jim Inhofe, chairman of the Senate Armed Services Committee, said Trump has the authority to take military action against Tehran, claiming "we're at war with them".

Washington and Tehran dispute the location of the drone when it was shot down by an Iranian surface-to-air missile last week. Tehran insists the aircraft violated its airspace when it was targeted while Washington maintains it was over international waters.

Tensions have been rising between the U.S. and Iran since May 2018, when Washington unilaterally withdrew from a landmark 2015 nuclear deal between Tehran and the five permanent members of the UN Security Council plus Germany and the European Union.

As part of its campaign, the U.S. has re-imposed sanctions on exports of Iranian crude oil, which has pushed Iran’s economy into a nosedive.

Keywords:
Donald TrumpU.S. President Donald TrumpIran
Your comment has been forwarded to the administrator for approval.×
Warning! Will constitute a criminal offense, illegal, threatening, offensive, insulting and swearing, derogatory, defamatory, vulgar, pornographic, indecent, personality rights, damaging or similar nature in the nature of all kinds of financial content, legal, criminal and administrative responsibility for the content of the sender member / members are belong.
Related News